MAP11: Satsui No Hado is the eleventh map of Slaughterfest 2011. It was designed by Daniel Jakobsson (dannebubinga) and uses the music track "Lunar Outpost" from the video game Descent.

The map name is a reference to the Street Fighter franchise, where it is the name of a dark energy force used by the character Akuma. It means "Surge of Killing Intent" and is sometimes translated as the "Dark Hado". 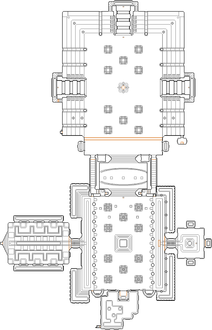 Map of Satsui No Hado
Letters in italics refer to marked spots on the map. Sector, thing, and linedef numbers in boldface are secrets which count toward the end-of-level tally.

* The vertex count without the effect of node building is 8514.