MAP11: Security Central is the eleventh map of Project Einherjar. It was designed by Mike MacDee (Impie) and uses the music track "". 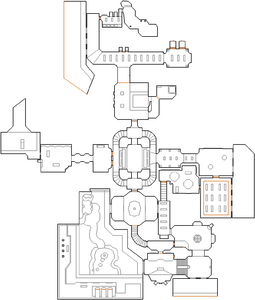 Map of Security Central
Letters in italics refer to marked spots on the map. Sector, thing, and linedef numbers in boldface are secrets which count toward the end-of-level tally.

The building is split into three sections: lobby, office, and lounge. The opening section is the lobby, which houses the yellow door that blocks accesses to the fountain controls. Flipping the switch lowers the blue key on top of the small fountain.

The red and yellow keys are found in the office section with the two large fountain beds. Both keys are guarded by Einherjar: one in the armory in the left wing, and one in the hall of records in the east wing. The red key isn't necessary to complete the level.

Once you have the yellow key, go back to the lobby and retrieve the blue key. Several ghosts spawn in when you grab it: kill them and go to the lounge on the other end of the building: here you'll find a heavily populated bar and an elevator bank housing two exits. The normal exit is opened with the blue key; the other requires all three keys and additionally rewards you with a blue armor for the next level, which you'll probably need.