MAP11: Sewer Shutdown is the eleventh level of Memento Mori II. It was designed by Eric Sargent and uses the music track "Tempter" by Mark Klem.

You need to get into the city and check for signs of life. The best route is through the sewers. By the time you reach this point, you should be at the heart of the sewer processing facility - and the city. Since the demons have invaded, little is known about the state of this facility, but this image from one of our scouts may help. We do know it is not 100% operational. It must have been damaged in some way. You must reach the central point of the processing facility and shut it down. Once the system has been shut down, you should be able to obtain access to the city. 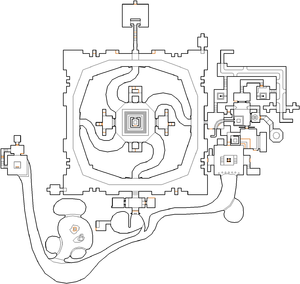 Map of Sewer Shutdown
Letters in italics refer to marked spots on the map. Sector, thing, and linedef numbers in boldface are secrets which count toward the end-of-level tally.

You begin in a small hallway. Grab the shotgun from the alcove and head into the sewer. Clear the imp cage to the south, then use the barrels in the sewer to bulldoze your way through the former humans. Continue forward to the second corner of the sewers, where you should be able to see an alcove in the south. Go into the alcove and go up the steps.

This next small room contains a slime pool and up to two shotgun guys. Carefully blow up the barrels in this room to kill them, then head down the steps ahead into a larger room with a slime channel. Kill the three shotgun guys waiting in ambush, then flip the switch in the south of the room. Leave this room through the corridor in the east, minding the two shotgun guys on the way.

From the corridor, you will emerge into a large room with a "broken bridge". Watch for the three imps on the floor, and more imps in cages in the north and east walls. There are some barrels in the west side, so use them carefully to take out the imps. Once they are dead, head south through the doorway.

This next room has some computer panels and a section of metal wall, along with some imps and two shotgun guys. However, as you enter, the metal wall lowers, revealing three chaingunners. Make them your priority target. Once the room is relatively clear, find the switch in the southeast corner, flip it, and immediately backtrack to the entrance of the room. The computer panels will lower, revealing a significant threat:

Go into their trap and collect the yellow key. Return to the main room and press "use" to lower the L-shaped platform that the chaingunners appeared from when you entered the room, and ride it up to a new area.

This next room is a challenge. As you enter, you are set upon by three shotgun guys and two Hell knights (one on Hey, not too rough and below). Imps will also attack you from cages on the east and west walls of the room, and some demons are being held back by metal bars in the north. When you hit the slime waterfall in either of the imp's cages, a computer panel in the north will open, releasing two chaingunners (Hey, not too rough and below), a cacodemon (Hurt me plenty), or a pain elemental (Ultra-Violence and above). Your priority is to:

Only then do you climb up to the central platform and flip the switch, because flipping the switch will not only lower the bars, but release up to six spectres into the room. You do not wish to be fighting twelve demons at once in that room!

Once the enemies are cleared out, head into the sludge. The brown sludge is safe to walk on. Run all the way west down the sewers, being careful of a couple of imps along the way. You should end up at a vaguely square area with a central metal structure. Kill the three imps and the chaingunner up top. Climb the stairs to the chaingunner's perch, and flip the switch. This lowers part of the metal structure, allowing you to flip the switch in it.

Backtrack east, and notice that a new area has opened up. The red key is on an island in the sludge here, as well as a box of shells on another island. Kill the four (three on Hey, not too rough and below) imps on the floor. Rush towards the red key, pick it up, then immediately run back to the entrance to this area. Walls will begin lowering, sandwiching you between Hell knights and a mancubus (two on Ultra-Violence and above). With some good positioning, you can start some monster infighting and let them do the dirty work for you. If going for maximum kills, do check for a Hell knight (Hey, not too rough and below) or a baron of Hell (Hurt me plenty and above) in the northern trap that will not come out unless you enter the trap.

Continue backtracking east, and notice a fork in the path (an imp ambushed you from behind at this point earlier). Take the left at the fork, and open the red-keyed door ahead. Proceed forward and clear the imp cage on the left, then head down the steps into the final sewer area.

This large area contains a significant amount of enemies - numerous imps, some shotgun guys and some chaingunners for cannon fodder. On Ultra-Violence, there are more serious threats in the form of mancubi and arachnotrons. The green slime here hurts, so if you are concerned, find the switches in either the northwest or southeast, which when flipped lower to reveal a radiation suit. Make your way to the north, and take the eastern white teleporter.

Next, take any of the passages into the centre of this sewer area. Beware of spectres and chaingunners. Enter the central structure by the north side and flip the switch inside. Head to the north of the sewer area, where a staircase will have appeared. Head up the staircase.

As you head up the staircase, a wall seals shut behind you. Ahead of you is a small open courtyard, with a tough encounter involving Hell nobles:

This is not an easy fight, with a high probability of being boxed in on higher difficulties. If you trust your speed more than your fighting skill, make a dash for the silver door in the north - the level will end without needing to open it.

Deathmatch is confined to the final sewer area. Players can spawn in alcoves in the northwest and southeast, or they may end up spawning in two elevated chambers that may give them a large amount of goodies. From there, they can drop down into the main arena.

Players who spawn from these chambers may be far more well-equipped than you expect - be careful!

* The vertex count without the effect of node building is 1502.