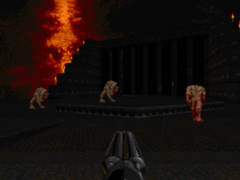 MAP11: Sick is the eleventh map of UAC Ultra. It uses a music track from Abuse, and ends with a boss fight against the Chimaira, one of the new monsters in the WAD.

Completing this level takes the player to a level which exists only to show the credits for the WAD, and to prevent the player from progressing into the regular Doom II level set.

Map of Sick
Letters in italics refer to marked spots on the map. Sector, thing, and linedef numbers in boldface are secrets which count toward the end-of-level tally.

Pick up the super shotgun and use the switch to lower into the map. Kill the demons and press on the pressure plate, looking out for spectres (barons of Hell on Ultra-Violence or higher) that teleport in. Proceed to the next few structures when the gate lowers. Here you will find three hand panels. Each of these panels lower the way to the central teleporter in the middle, but also lower certain monsters and supplies. The one on the left side lowers some chaingunners and a plasma rifle, while the one on the right lowers imps and a rocket launcher. The one at the north end lowers some shotgun guys and a chainsaw. When each weapon lowers, look out for an arch-vile that teleports on it. You only need to press the left and right hand panels to access the teleporter.

Upon taking the teleporter, several cacodemons (and imps on Hurt Me Plenty or higher) will greet you. Dispose of them and head out, disposing of chaingunners as you head north. When you reach the chaingun, the wall will lower. Grab the megasphere, and use the lift to head up to meet the Chimaira. Before you do anything to the boss, kill all the various monsters you see around him. Then, shoot the three pink veins you see to open his mouth. He will start spewing imp fireballs continuously, so avoid them while you shoot his heart to kill him and end the wad.

Linedefs 2151, 2152, and 2097 have no lower textures and display a HOM when the floor is activated to raise up. This isn't usually seen on single player as the player cannot go back down once he/she has gone up the lift but it is perfectly noticeable in cooperative.

The design of the Chimaira is based on an image titled "Caretaker's Chimaira," drawn by Chronoteeth and Slug. It was used with both artists' permission.