MAP11: Spiralunky is the eleventh map of Doomworld Mega Project 2017. It was designed by Ben Mansell (Bauul) and uses the music track "The Baying of the Hounds" by Opeth, sequenced to MIDI. 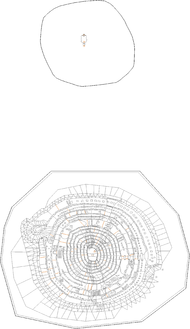 Map of Spiralunky
Letters in italics refer to marked spots on the map. Sector numbers in boldface are secrets which count toward the end-of-level tally.

The exit switch can be reached through the red key barriers, meaning most of the map can be skipped.

* The vertex count without the effect of node building is 12049.

The title is a combination of "spiral" (the overall shape of the map) and Spelunky, the 2D platforming roguelike that is themed around delving underground (as the map involves climbing out of the ground).