MAP11: Subspace is the eleventh map of PlayStation Final Doom, and the eleventh map of the Master Levels episode. It is based on the PC version of MAP01: Subspace from the Master Levels for Doom II, with modifications to accommodate the PlayStation's framerate and memory limitations and add enhancements such as colored lighting. It uses the music track "Retribution Dawns".

The author of the original level was Christen Klie. Changes for the PlayStation port were authored by Tim Heydelaar.[1] 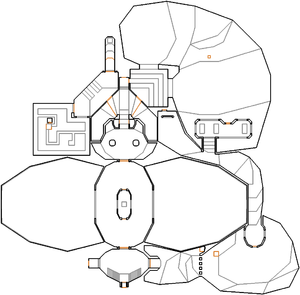 Map of Subspace
Letters in italics refer to marked spots on the map. Sector, thing, and linedef numbers in boldface are secrets which count toward the end-of-level tally.

Shoot the silver door in front of you to open it, then go inside the small structure and take the red skull key. Watch out for the lost souls that enter the room through the windows.

Leave the room through the northern red door and go north up the staircase. At the top, go south-east down another staircase which will cause a wall behind you to open. Go through that wall and then go north-west into a small alcove containing various items. Press the switch in this room (which will reveal a switch elsewhere in the level) then go down the staircase you just used to open the wall again. Go through the wall and head north up the square staircase to a large outdoor area. Climb the large steps and press any of the floating switches at the top. Head south to a gray building and go through the door, then keep heading south down a staircase. At the bottom, go north-west and press the switch hidden behind the computer screens (this is the switch you revealed earlier). Now follow the tunnel south-east until you reach another gray building and go through the door. Climb up the steps here and step on the teleporter holding the yellow skull key to collect it.

You will be returned to the room north of the starting area. Go north up the stairs and then go south-west down a staircase, which will lower another wall behind you. Go through this wall to another room, then climb the south-west stairs and open the west wall (which is actually a door; use the automap to locate it). In this room, follow the narrow walkway to a switch and press it. Return to the previous room and open the yellow door in the north-east corner, and take the blue skull key from behind it.

Return to the starting area and go through the southern red door. Climb either staircase, open the blue door at the top and press the switch behind it. This will temporarily lower the computer screens on the east and west walls; run through the east wall to get outside, and climb the steps to the exit teleporter. Run onto the teleporter to collect a rocket launcher as the level finishes.

The yellow door used to access the western-most room is missing its yellow skull markers, and the door itself has the same texture as the wall. The door functions normally when used, so this bug is probably an error in converting the map for PlayStation.

Unusually for PlayStation Doom, there are no changes to the number or types of monsters encountered.

* The vertex count without the effect of node building is 749.