MAP11: Substation is the eleventh map of Doom 2 Unleashed. It was designed by Ronald Lubbelinkhof (Dutch Devil) and uses the music track "Aliens, Say Your Prayers!" from Duke Nukem 3D.

When using the music WAD included with this megawad, this level instead uses the music track "12 bit blues" by Paul Corfiatis. 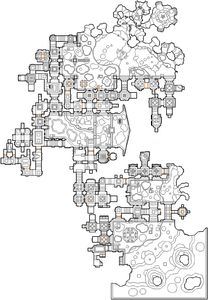 Map of Substation
Letters in italics refer to marked spots on the map. Sector, thing, and linedef numbers in boldface are secrets which count toward the end-of-level tally.

Press the switch on the right-hand wall to open the door then follow the passage round to a second door, watching out for two imps that emerge from an alcove behind you. Go through the door and head north, following the passage past various monsters until you get outside and reach a large crate with armor next to it. Go south-east from here until you reach some small crates, where you will find the blue keycard next to a super shotgun. Approaching the key will cause many monsters to teleport in to the small red pads around the area, including demons, imps and shotgun guys.

Take the blue key then backtrack to the second door from the start point, heading west into a small room with armor and a switch. Press the switch to open two alcoves containing shotgun guys, then kill the enemies teleporting in to the hallway and head east through a door that has just opened to go outside. Go forward until you reach the concrete wall, then turn right and go through another door guarded by an imp. Head south-west and go down a staircase, then head forward to a switch which will open the door on your left. Go through it, ready to face an imp ambush, then follow the passage east and north to a door leading to a third outdoor area. Head due east until you reach a set of brown steps and follow them round to a door with blue key markings, which is guarded by two chaingunners.

Go through the door, ready to kill two Hell knights plus a baron of Hell on Ultra-Violence (UV) and Nightmare (NM) skill levels. Head north into a small chamber to find a switch next to a shotgun and press it, kill any imps and shotgun guys that teleport into the neighboring passage then backtrack to the second outdoor area and head north into a depression. Go through the doorway in the north-east corner and follow the path until you reach a river (watch out for an ambush by imps and chaingunners in the tunnel), then head east over a waterfall and then south-east through another doorway. Follow the water-filled passage past some spectres and imps until you reach a teleporter, which is guarded by a knight on UV and NM. After using the teleporter, turn left and ride the lift up to find the yellow keycard.

Ride the lift back down and step through the teleporter, then follow the water-filled passage north - watch out for two closets that have opened to reveal imps and shotgun guys, as well as two arachnotrons waiting outside. Retrace your steps to the third outdoor area where you found the blue key door, then drop into the water and head south through a tunnel. On the other side of the tunnel, continue following the river until you see some stone steps on your right and climb these to reach a helipad with an arachnotron. Go through a door north-west of the helipad and follow the tunnel behind it to a switch next to a box of bullets. Flipping the switch will cause monsters to teleport into the outdoor areas behind the fences - two mancubi will also appear on platforms overlooking the helipad. Go back outside and head south to a set of steps behind a low wall, which lead to a now-open door. Kill the monsters waiting behind it, including a knight on Hurt Me Plenty (HMP) skill level or higher, then step into the blue teleporter and follow the passage round to the red keycard. Watch out for two barons that are released into the passage when you approach the key.

Backtrack to where you found the blue key, but watch out for the chaingunners, imps and revenants that have appeared by the helipad and the blue key door. West of where you found the blue key is a teleporter which will put you inside the building directly to the west; head south through a door with red key markings, then follow the passage round to a lift. Before stepping on the lift, press the switch on the north wall which will open a door east of the lift. Ride the lift down and go through the door you just opened, ready to kill an arch-vile waiting in an alcove ahead. Once the arch-vile is dead, dispose of the approaching chaingunners (plus two revenants on UV and NM) then head south until you pass through a concrete doorway. Turn left to go through the exit door, and slay the imp guarding the exit switch before flipping it to finish the level.

In the passage connecting the second and third outdoor areas, you must press a switch to open a small door on the left. Just before reaching this switch, you will pass an open doorway that leads to a rocket launcher.

A megaarmor can be found behind a crate north of the helipad.

The following weapons are added to this level in deathmatch:

* The vertex count without the effect of node building is 9230.