MAP11: Technicfear is the eleventh map of Claustrophobia 1024. It was designed by Paul Corfiatis, who also wrote the music track for this map. 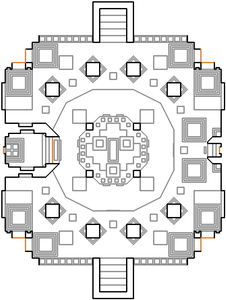 Map of Technicfear, cropped to only show the playable area
Letters in italics refer to marked spots on the map. Sector numbers in boldface are secrets which count toward the end-of-level tally.

The level consists of a room, an exit door, three keys and a door that requires all three keys. There is a switch in each corner of the room. Pressing every switch allows you to gain access to the keys. Once you open the door you must fight a cyberdemon using your super shotgun. You fight him by strafing left and right and keep on firing at him until he is killed. Once killed pressing the switch opens the exit door on the opposite side of the room. Kill the arch-vile and exit the map.

* The vertex count without the effect of node building is 1246.