MAP11: The Colossus Crawls West is the eleventh level of the first episode of Back to Saturn X. It was designed by Ed Cripps and uses the music track "Yaw" by James Paddock. The par time is 4:45. In the official add-on version, this level's name is Not Drawing The Mammoth. 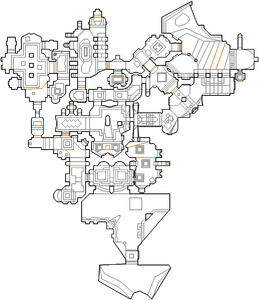 Map of The Colossus Crawls West
Letters in italics refer to marked spots on the map. Sector, thing, and linedef numbers in boldface are secrets which count toward the end-of-level tally.

Climb the steps to a shotgun then follow the corridor past some zombies and imps until you reach a berserk pack, which is protected by a shotgun guy and demon. Flip the switch behind the shotgun guy to lower a wall behind you, then step past it (it will seal behind you) and head forward until you see three more walls lower around you to reveal a chaingunner along with other enemies that teleport in. Press the button that was hidden behind the east wall to open a door behind you and reveal another chaingunner, then step through the door and fight your way past two arachnotrons (one is on a platform outside the windows) to reach a second door that will open to reveal a super shotgun and a mancubus. Follow the hallway up some steps to a door with blue lights, but use caution as it is protected by one or two cacodemons as well as a chaingunner and shotgun guy that are waiting behind the back wall (there is also a rocket launcher here if you need it). Open the door and slay all the enemies in the next room, including a mancubus and revenant, then press the button on the east wall to lower a pillar on your right holding the blue keycard.

Slay the enemies that teleported in when you pressed the button, including Hell knights on Hurt Me Plenty skill level or mancubi on Ultra-Violence (UV) and Nightmare (NM), then leave the room through the opening in the east wall to get back to where you found the berserk. Head back towards the starting point until you see a blue key door on your left and open it to confront a chaingunner along with two cacodemons, then head forward to a chaingun (plasma gun on I'm Too Young To Die (ITYTD) and Hey Not Too Rough (HNTR)) in front of a lift that will take you down to a hallway with imps. Follow the hallway west to a door and open it (an arch-vile will be waiting on UV and NM), then climb the steps to find two mancubi guarding the yellow keycard (currently behind bars). Open the door in the south wall and fight your way east past some imps and a revenant until you reach a switch at the end of the corridor, pull it to lower a wall on your right leading back to the blue key door, then flip an arrow switch that has been revealed to your right to lower the north-east wall. Step through this wall and follow the walkway to get the red keycard.

Head west back to the lift you used earlier and ride it down again, then walk north-east to a red key door and open it to get outside; arm yourself before heading down the steps ahead, as demons, imps and zombies will teleport in around you. Go to the bottom of the steps and note the locked exit door on your right, then flip the switch opposite it before entering the red teleporter in the back wall, which will send you back to the hallway west of the red key door. A set of bars blocking a switch have lowered in front of you - flip the switch (and take a supercharge behind you on ITYTD and HNTR) and kill the enemies that teleport in to the hallway, then enter the neighboring room to the west and climb the steps to see that two doors in the west wall have opened to reveal imps and demons. Step though either door and turn left to see a switch, pull it to lower a nearby wall then kill two arch-viles that teleport in before stepping through to a hall with three columns. Entering the hall will release a pack of shotgun guys and chaingunners into it - fight your way to the switch on the west wall and flip it, then head east into the previous room to find that the bars in front of the yellow key have lowered, allowing you to collect it.

Taking the yellow key will release two barons of Hell to the north, as well as allowing demons, imps and zombies to teleport in - fight your way out, then head back through the red key door and descend the steps to the exit door you saw earlier. You can now open this door to reveal a revenant guarding the exit switch, but watch out for two more revenants that teleport behind you.

* The vertex count without the effect of node building is 2841.