MAP11: The Furnace is the eleventh map of Sunder. It was designed by Insane_Gazebo and uses the music track "SA-X Arrival Theme," from Metroid Fusion. 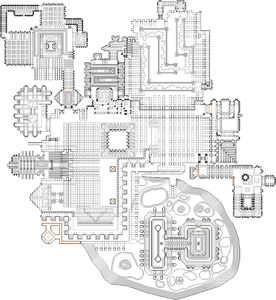 Map of The Furnace
Letters in italics refer to marked spots on the map. Sector, thing, and linedef numbers in boldface are secrets which count toward the end-of-level tally.

The Furnace is the largest level yet, and as before, you are given what you need right at the start. This includes every weapon and a megasphere, although the BFG9000 will be available once you drop in.

While this opening area is huge, it is filled to the brim with enemies. Behind the starting wall are six cyberdemons and a huge horde of demons, with two spider masterminds to the north and east. A horde of mancubi is further to the east, along with another horde of mancubi around the block to the northeast, which contains lots of revenants on top. The ledges at the south and east contain lots of imps and Hell knights, and there are more imps and Hell knights in an area to the northwest, which is where you eventually need to go. Of particular note are the two teleporters at the east wall here, both of which have invulnerabilities on them and which will take you to the block with revenants (the north one) and the ledge with Hell knights (the south one). Both the block with revenants and the ledge with Hell knights contain additional invulnerabilities which can be used. Provoke monster infighting when you can and make sure you are never surrounded.

If you manage it, congratulations, you have defeated almost two thousand of the monsters on this map. Go to the northwest section of this area and climb the steps to the middle to find barons of Hell on small blocks over the lava. You will need to traverse these blocks to the switch at the north end, but note there is no escaping the lava should you fall in at any time. After pressing this switch, another one will be revealed in the northwest corner, so traverse the blocks back and then press that switch. This will open the northern door in the big area.

Run down the hallway to a relatively empty area and find the switch with the megasphere in front of it. This switch will lower the surrounding walls. To the west and north you will find masses of imps, near the entrance of this area (which has now been sealed off) revenants will run in, and to the east is a large horde of Hell knights. A good strategy here is to defeat the imps first, which will give you more room to run around. When ready, take the back passage to the northwest where the imps were to a raised ledge with a soul sphere and a switch. When you press it, two revenants and an arch-vile will teleport to the hallway, and four more arch-viles will be in the central part of this area, so quickly get rid of them. At the east end of the large column will be a switch, which will open up a teleporter to the northwest, taking you back to the beginning area.

A spider mastermind will appear to the west of where you appear, so get rid of it quickly, then go around the block that had revenants on it to find the next area to the east open, with a horde of arachnotrons pouring out. Head all the way to the southeast to pick up a soul sphere and megaarmor, then run into the next area. Cross the bridge (you can alternatively run across the ramparts here, but this is dangerous as there is no way out if you fall into the lava, and the same can be said for the lava in the next area) and find the switch on the left side of the middle column. Two cyberdemons will show up from the blocks to the south and east, and two walls of mancubi will be behind them while revenants start teleporting in from the west. This part can be deceptively tough. There is a teleporter in the northeast corner that can be used to escape, and you will run into two arch-viles guarding a switch that opens the way out over here. When you are done, press that switch (it is repeatable in case the door closes again) as well as the switch on the east wall where the mancubi came from to leave.

Your next destination will be just to the north of the block that had revenants on it. You will climb a series of steps, but will also be attacked by numerous imps as you do. At the top, the next area is to the northeast, which is a winding path. Grabbing the soul sphere will cause a room ahead to open with five revenants and two mancubi in it. This room will have a switch, which will open another room at the opposite end of the path where you came from that has the same enemies as the previous room. You will have to deal with six identical rooms, each having the same exact monsters in it, all the while going back and forth along this winding path in order to proceed further north. While you are doing this, cacodemons will teleport in, harassing you from behind the cages and also attacking you directly.

When finished, head north into the next empty area and head east. A switch is tucked on a wall in the southeast corner, which will lower two walls with pain elementals behind them. The left wall will also have a switch, which opens a wall to the right of the previous switch. Grab the megasphere and use the skull switch to trigger a lift outside. Take it up and follow the path to the next big area. In this large maze-like area, you will want to get rid of all the ground opposition first. Ignore the Hell knights on the high ledges above, you will deal with the later. From the entrance to this area, turn northeast and get rid of the arch-vile, then head southeast to find a large horde of revenants and a cyberdemon, who is in front of a switch. Use it, then go to the east side of this area to find the same thing: revenants, a cyberdemon, and a switch. Now go to the southern part of this area for more revenants, a cyberdemon, and a switch. Once you have used all three switches, go to the north end of the area to find a passage leading further north.

Take the lift up and follow the path to a megasphere. This will probably be the toughest challenge of the map and will require the utmost in eye-hand coordination plus quick reflexes to master. You will be on the uppermost parts of the maze-like area, where you must traverse block after block over the maze-like area and over blocks of lava. Remember, there is no way out of the lava if you fall in. The Hell knights from before will be shooting at you, so you need to be both quick and steady. You will have to leap the blocks until you reach the southeast end. When you accomplish this, grab the soul sphere and get ready to turn the tide on the Hell knights, getting rid of them on both high ledges until you teleport out of that area.

Run east to be greeted by two cyberdemons in the distance. Drop into the pit past the megasphere to find a horde of revenants, a cyberdemon behind them, and a horde of imps to the south. You need to press two switches in this area. One is just to the north of where the cyberdemon was, and the other is at the furthest end to the south. After you press both, the two metal walls at the east end will be gone, and you can head to the southeast teleporter. Head east, then south, then west, climbing the steps as you go. You are about to leave the furnace, as seen with the relatively green-looking area. As you might expect, it is only gonna be quiet until you are ready to face the final challenge of the map. With almost four thousand enemies killed at this point, you should definitely be prepared.

When ready, the switch that needs to be pressed is at the south end. While the switch opens the door into the central building, hordes of monsters will teleport all around the building, starting with imps, Hell knights, and revenants, but then you will start fighting mancubi in droves. No less than six spider masterminds and twenty cyberdemons will also come in. Utilize monster infighting by continuously circling the arena, use the pillars to block enemy projectiles, and take note that if you are circling on the left side of the building, the area is rather thin, which can be problematic. Some of the enemies may also enter the building itself. When you enter the building itself, make sure to prepare for the twenty-four arch-viles inside. Get out of the building to take cover until you get rid of them all. Another cyberdemon will be up the steps to the west, and there is a switch opposite of the building's entrance. This switch opens the doors to the sides of where the cyberdemon was, allowing you to get on the high ledge of the building outside. You can then make a jump to the west, and continue going west to reach the exit.

* The vertex count without the effect of node building is 27459.