MAP11: The Garrison is the eleventh map of Doom 2 the Way id Did. It was designed by Walker Wright (Pavera) in the style of John Romero. The par time defined in the DEHACKED lump is 3:15. 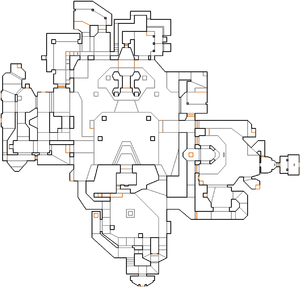 Map of The Garrison
Letters in italics refer to marked spots on the map. Sector numbers in boldface are secrets which count toward the end-of-level tally.

A lift to north of the central area has a pressable action linedef that is flipped to the wrong side, making it impossible to use it.