MAP11: The Grieving Outpost is the eleventh map of Community Chest 3. It was designed by Burke Hill (Kirby), and uses the music track "Kitchen Ace (and Taking Names)" from Doom. It makes use of the GothicDM texture set, and is noticeably smaller than other levels in the megawad. 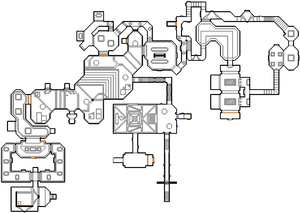 Map of The Grieving Outpost
Letters in italics refer to marked spots on the map. Sector, thing, and linedef numbers in boldface are secrets which count toward the end-of-level tally.

* The vertex count without the effect of node building is 2361.