MAP11: The Ignorant is the eleventh map of the Newdoom Community Project. It was designed by Trevor Primmett (iori). 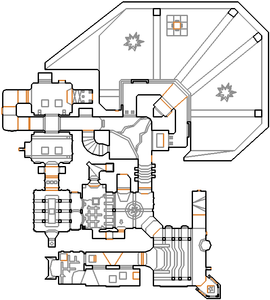 Map of The Ignorant
Letters in italics refer to marked spots on the map. Sector, thing, and linedef numbers in boldface are secrets which count toward the end-of-level tally.

Kill the imps in front of you and approach the door. You will be barred and several chaingunners ambush you from the east. The switch in their closet removes those bars. Go through to the next room. Approach the switch to the east and it will be blocked by blue bars while a blue switch appears nearby. Now head west and cross over to the next room. A channel of blood is here along with imps in a cage. Hit the switch to instantly reveal stairs to a door. Behind this door, an arrow points to the door slightly to your right. Ignore it for now and head southeast into a new room. Go through the door immediately to your right as you enter and head west grabbing a super shotgun and stepping on the lit platform with gibs on it. When you step on it you will see metal railings allowing access to a rocket launcher. More importantly, other railings will be revealed leading to the blue keycard. To get the rocket launcher, head back into the previous room and hit the switch on the eastern side to lower a lift north of you to another switch. This switch opens a tiny door in the room a bit south of the first switch you pressed in that room. Shoot this switch to raise the nukage up so you can access a teleporter. Go on the metal railings and grab the rocket launcher. To get the blue key, go back to the room with the door that the arrow is pointing to. You will be able to access it thanks to the metal railings. There is a teleporter at the bottom of the nukage in case you fall in, taking you back to the room. There should be another door here leading to a switch which opens the door next to it, the same one you came in, allowing you to go back. With that in mind, head back to the room with the blood channel. A new area with cacodemons and red bars is open. Examine the bars and you will be able to go back westward to where the blue-barred switch was. Flip the switches and the red bars where the cacodemons were will be open to give you access to a wooden area. Go back here and approach the box of rockets to open an alcove with a baron of Hell in it. The switch here lowers a courtyard with many monsters and an exit teleporter.