MAP11: Transcension is the eleventh map of Speed of Doom. It was designed by Josh Sealy and uses Techno Ownage, an original track by James Paddock.

This map uses a forced suicide exit at the end to reset the player's inventory at the start of the next map. 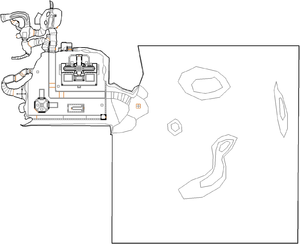 Map of Transcension
Letters in italics refer to marked spots on the map. Sector numbers in boldface are secrets which count toward the end-of-level tally.

Linedef 55's back side has CEIL5_2 set as an upper texture, but CEIL5_2 is a flat. While most modern source ports should simply ignore it, both Boom 2.02 and MBF 2.03 on DOS will crash immediately, leaving the following error message at the DOS prompt.

The SIDEDEFS lump can be edited manually to remove CEIL5_2 from linedef 55, allowing this map to run in Boom and MBF (no texture is required on this linedef's back side).

* The vertex count without the effect of node building is 2410.