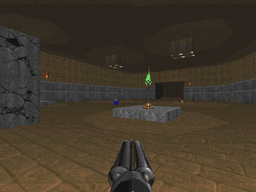 MAP11: Underground Base, designed by Yonatan Donner, is the eleventh map of Hell Revealed. It uses the music track "Chant" from Rise of the Triad.

One of my first maps for Hell Revealed and still I like it a lot. This is a large underground base, and the first real challenge in Hell Revealed. If you can't stand Ultra-Violence - this is the time to switch to a lower skill level. The last level in the first episode of Hell Revealed has no mercy (3 cyberdemons, 2 spiderdemons, 16 archviles and a lot more). 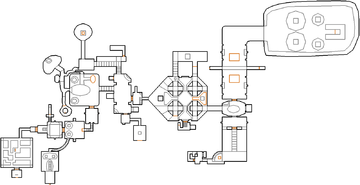 Map of Underground Base
Letters in italics refer to marked spots on the map. Sector, thing, and linedef numbers in boldface are secrets which count toward the end-of-level tally.

Take the small path to the right if you need a shotgun, then open the door at the start. The next room has a caged arch-vile directly to the right and a few monsters in front of you, plus two different paths. Start by taking the stairs on the left first. In this rocky-floored area with water canals, there is a place to drop down near the big water pool, so drop down there and you will immediately reach a fork. Go left first, heading around the round pillar to find a Hell knight and a switch to press. Then take the other path in the fork, where you should go right (left leads to a group of revenants and a chaingun) to find an arch-vile in the next room. You should see some stairs in this room, ignore them for now and take the path that is to your left. Taking this path, you will find some imps and the red keycard. Now take the steps up and you will find yourself back at the first big room.

Now take the door to the east, and take the steps down into a large chamber. There are a lot of enemies here, including imps, cacodemons, and barons of Hell. If you approach the back end of the chamber, a cyberdemon will appear. The southern door in this chamber will lead to a super shotgun should you need it. In order to progress, head just left of that door and take the lift upwards to the towers in the chamber, but look out for arch-viles that inhabit these towers. Cross across each tower by jumping, until you reach the southeastern tower. Here cross to the east, but look out for the cyberdemon that is in the toxic pool. In this area, you have to head through the red door on your left, as the other door is locked. Through the red door, there are a lot of enemies on raised ledges, so kill them and use the lift. When it rises, make a good jump but make sure to stay on the thin strip of raised ground. When you do, press the switch that is to the left. The area north of the thin strip leads to a large room with a lot of demons on ground floor and some Hell knights and barons on ledges. There is a BFG9000 in this room, grabbing it pits you against a cyberdemon and some revenants. This area is optional however, but it is recommended if you want the BFG. Go back to the room with the toxic pool to find the other door is open, so enter and take out the enemies in this room including the spider mastermind at the top of the steps. Climb the steps and after a curved set of steps you will get the blue keycard.

After getting the blue key, return to the first big room and then head back into the room with the water canals. The blue door should be in this room, so take it and follow the halls to a small room with caged arch-viles and a few ground monsters. Before opening the door here, there is a path to the left, leading downwards into a cave with a spider mastermind. Kill the spiderdemon and press the switch behind him, then get out of the cave and, back in the previous room, open the big wooden door. The yellow door is straight ahead, and the key to that door is in a passage to the right, which has an arch-vile and some revenants. Opening the yellow door you will find a pain elemental and some lost souls. Kill them and proceed through the tunnel until you find a number of cages with Hell knights and barons of Hell inside. A switch is in the middle here which opens up the exit door. You need to quickly flip it then maneuver through the maze of cages to the exit before the door closes.