MAP11: dltexamp is the eleventh map of Doomworld Mega Project 2012. It was designed by scorpion. 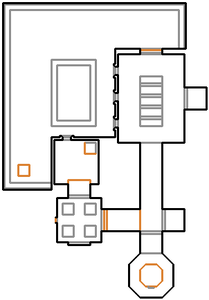 Map of dltexamp
Letters in italics refer to marked spots on the map. Sector numbers in boldface are secrets which count toward the end-of-level tally.

* The vertex count without the effect of node building is 214.

The map was originally created in October of 2012 as an example to a class of Doom mapping students in China on how to create doors, lifts, and teleporters. The name 'dltexamp' stands for 'Door, Lift, and Teleporter Example'.

It was created with a pistol start in mind, but ended up as MAP11 because maps were entered in alphabetical order of the creators' names.