MAP11 is the eleventh map of 2 Sectors. It was designed by jetflock. 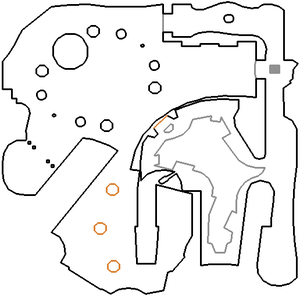 Map of MAP11
Letters in italics refer to marked spots on the map. Sector, thing, and linedef numbers in boldface are secrets which count toward the end-of-level tally.

Go round the corner to confront a demon, zombieman and shotgun guy then head north to find a chainsaw surrounded by round columns and lamps. Go east from here into a dark tunnel with candles then turn right and right again to confront two mancubi and a pain elemental who are guarding a knife switch. Throw this switch to finish the level.

Look south-west from the column area to see a shotgun behind some thin silver bars, guarded by two spectres.

Head north and west around the outside of the columns and lamps past a revenant and cacodemon to find a plasma gun.

As soon as you enter the dark tunnel, turn left and follow the candles to a backpack guarded by two imps and lost souls. A rocket launcher can be found at the south end of the tunnel between some lamps.