MAP11 is the eleventh and final map of Dystopia 3. It was designed by Anthony "Adelusion" Czerwonka and Iikka "Fingers" Keränen and uses the music track "". 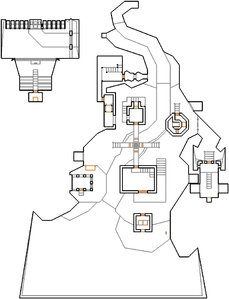 Map of MAP11
Letters in italics refer to marked spots on the map. Sector, thing, and linedef numbers in boldface are secrets which count toward the end-of-level tally.

The final map of Dystopia 3 has a large number of Doom II's tough monsters, and little in the way of healing items. Fortunately, you are given the tools required to take on these monsters at the beginning of the map, and the healing items restore plenty of health at once.

You begin in a raised area overlooking a slime river. Collect the shotgun, plasma gun, rocket launcher and three boxes of rockets. Use your rocket launcher to deal with up to three revenants on the ledge across the river. There are also up to two mancubi (none on Hey, not too rough and below) at the end of the raised area - with some careful positioning, you could even get the revenants and mancubi to infight.

Head into the doorway in the ash wall, which leads into a small cave. On Hurt me plenty and above, you have a baron of Hell to deal with. Take it out and pick up the megaarmor and backpack, then open the door at the end of the cave.

You will enter a silver building and be faced with up to two shotgun guys and two chaingunners - no big deal. Up to two cacodemons will be awakened, which the plasma gun should handle easily. Head down the stairs and pick up the super shotgun. On Hurt me plenty and above, there is a mancubus waiting down there - perfect for the super shotgun. Continuing forward, you will encounter a revenant in the narrow corridor (two on Ultra-Violence and above) - be liberal with your use of plasma.

Open the silver door at the end of the narrow corridor, and you will stare down another mancubus. Use the super shotgun on it, peeking back and forth through the doorway. Head through the doorway and ride the platform down to an arachnotron (not on Hey, not too rough and below), which more plasma will easily handle. Kill it and head outside.

As you head outside, you will be ambushed by a revenant from the right. On Ultra-Violence and above, there is a revenant to the left as well, which might be a problem. When you have dealt with them, head right (south) and kill one more arachnotron, then head for the metal platform in the southwest brown structure. Lower it and ride it to the top. There are up to two arachnotrons on this ledge, and up to two more in the central building. On Ultra-Violence and above, you may need to be careful of an arachnotron on a ledge south of the green building in the east, which can fire on you when you when you move south towards the entrance of the central building. Kill them all and collect the blue key from the central building.

When you head back down from this raised area, a trap will have opened near the lift with a mancubus. Kill it and collect the soulsphere it was guarding.

Head east across the lower of the two intersecting bridges. You might want to deal with the arachnotrons in the south, as well as the mancubus behind the eastern gate (not on Hey, not too rough and below). Once done, head to the red brick tower and enter it through the door in the north. Make your way to the top, slaughtering shotgun guys along the way (on Ultra-Violence and above, the platform has a shotgun guy, and there is a chaingunner at the top). At the very top, you will find a niche with a baron of Hell (Hell knight on Hey, not too rough and below). You will have to fight it with minimal space, so be very careful. Once it is dead, take the BFG9000 it was protecting and flip the switch in the alcove. Make your way back down, and you will find that a trap has opened in the east with up to three barons of Hell. Your BFG9000 is perfect for the situation. Kill them and collect a megasphere, which will come in handy later.

The gate in the east is now open. Head through it to find a new area with a brown building. As you approach it, an arachnotron to the right will be awakened, followed by a revenant hiding in ambush to the left. A Hell knight (two on Ultra-Violence and above) may also attempt to take potshots at you through the two windows of the building ahead. Deal with these monsters and head through the door into the building ahead.

As you enter the building, the door closes behind you. On Hey, not too rough and below, the building seems empty. You can grab the soulsphere and yellow key easily. However, on higher skill levels, there are ten imps down there - again, be liberal with plasma cells. As you grab the yellow key from its alcoves, two sides to either side open. The west one has a mancubus (cacodemon on Hey, not too rough and below). The east one has up to two chaingunners and a revenant (Ultra-Violence and above only). This is a recipe for more infighting - use it well. When the door of the building opens again, head back out.

Head back west past where the gate was, then head south to the grey brick building. Open the door and kill the revenant inside (two on Ultra-Violence and above). Before you take the teleporter inside, remember that the switch you need to flip is left of the doorway, because you will need to act fast. Take the teleporter to be teleported to the other side of the grey building. Before you step out of the building, give the mancubus in front of you a BFG9000 shot. Walk out, and you will awaken a cyberdemon in the west (baron of Hell on Hey, not too rough and below). Quickly head left, flip the switch, get back into the grey brick building and take the teleporter back up to the upper half.

This switch raised steps to the green building in the south. On your way there, you will have to deal with a trap with a mancubus. Head up the steps, go around the ledge, equip your BFG9000 again and open the door. There is a spiderdemon in there, but competent BFG9000 users should be able to down it in one shot. Continue wielding your BFG9000, head up the steps in this room, open the door in the room ahead and cross the higher of the two intersecting bridges. As you open the door, get ready to use your BFG9000 one more time.

If you are on Hey, not too rough and below, you need to enter the room to awaken a Hell knight right of the door. On higher skill levels, an arch-vile is in position to immolate you. A BFG blast should end either. Head through the door in the west, clear out any revenants and flip the switch at the end of the ledge to unblock the teleporter. Backtrack to this room and head through the teleporter.

Open the door ahead, head down the steps and flip the switch for a humorous finale, which ends the level.

* The vertex count without the effect of node building is 968.