MAP12: Altar Of Pain is the twelfth map of Doom 64 and has the secret exit to MAP30: The Lair. It is designed by Tim Heydelaar and uses the music track "Lamentation Of The Forgotten". The map is a large fortress-like structure with elevated walkways, pavilions, alcoves, corridors, and spur alleyways. Additionally, a very tall stone wall encapsulates the map which has enemies positioned atop on patrol, complete with a dark and stormy sky. 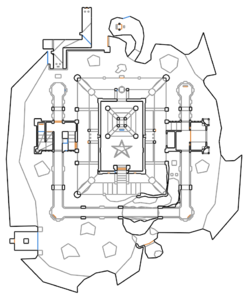 Map of Altar Of Pain
Letters in italics refer to marked spots on the map. Sector and Thing numbers in boldface are secrets which count toward the end-of-level tally.

You start off being dropped into a shallow blood moat where a group of imps and a cacodemon will immediately welcome you. More imps and mancubi will attack you from their higher ground as well. Clear out the moat and eliminate any immediate threats lurking in the moats, and scavenge ammo as needed. Return to where you begin, and head to the room with a pillar adorned with demon faces. A baron of Hell is waiting behind the pillar guarding the teleporter to the main structure.

Take the teleporter to enter the fortress. Taking the lower left path further down will lead to a corridor with pinkies guarding it. The end of this corridor contains a blue skull key, but the access is blocked by two small pylons with rotating demonic artistry. Follow the right path and take note of the blue door here. Continue on and kill the imps, cacodemons and mancubi that stand in your way until you see a switch with a soulsphere perched on a ledge above it. Press it and return to where you came from, then take the lower left path with the pinkies to collect the blue key. Return to the blue key door you found earlier, and head inside. Beyond the blue door are a few Hell knights waiting inside the narrow, tight, green corridor system, so clear them out.

Ignore the yellow door for now and walk past it into the last corridor. A wall can be heard opening nearby, and backtrack to the yellow door. A niche containing a security armor pickup and a switch is now accessible and interacting with the switch will raise the steps in the dead end you were just in. Take the stairs up to the plasma gun and a switch drops down directly in front of you once you pick it up. This switch retracts the bars that block the elevators from access to you that take you to the top tier of the fortress where the barons you avoided before lurk.

As you make your way around the top tier, be aware of any Hell knights, imps, or mancubi remaining on the outer walls and walkways. Dispatch the barons on the top tier as well. On each end of the tier are two switches. The switches raise staircases and open up walls which allow you to traverse a section of the elevated walkway to collect the red skull key. Take it and follow the open path leading to a switch and a Hell knight. Interact with the switch at the very end and take the other end of the now open walkway to the switch with a partial invisibility sitting nearby. This switch will raise the staircase leading up to the red door and open another section of the elevated walkway on the other side of the fortress.

Through the red door is the chamber where the altar of pain is located. The altar is surrounded by a large pentagram star that flashes on the floor with five barons guarding the altar, and the legendary Unmaker sitting atop of the altar. Killing them will cause a switch to raise from the floor in front of the altar, which once accessed opens a window to reveal the yellow skull key. Activating the switch will also trigger the appearance of two more barons which need to be dealt with before exiting the chamber.

Head back to the top tier of the fortress and pick up the yellow skull key. Then make your way to the yellow door located beyond the blue door. Beyond the yellow door is a short, open ended section of the elevated walkway that leads toward a pavilion that houses the exit switch. To get there, activate the switch at the edge which raises a small platform that allows you to jump into the pavilion. The corridor in the pavilion is dimly lit and a Hell knight lurks around the corner. Take it out and then you can see the exit switch, however as you approach it, it will become barred off and the lights will shut off. A wall will open up and another Hell knight will ambush you. Take him out and the lights will come back on and the bars in front of the exit switch will also lower, allowing you to hit the switch and end the map.

* The vertex count without the effect of node building is 1407.