MAP12: Anti Static is the twelfth map of Hell Revealed II. It was designed by Michael Reid and uses the music track "Sweaty Mancubus Armpits" by Sam Woodman. 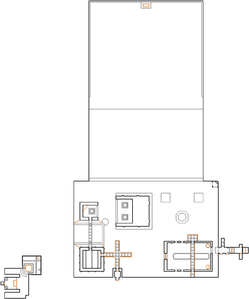 Map of Anti Static
Letters in italics refer to marked spots on the map. Sector, thing, and linedef numbers in boldface are secrets which count toward the end-of-level tally.

Cover is very limited in the main area of this map. While this is normally not a problem, the number of arch-viles in the map will have you scouring for cover whenever possible. In any situation, make sure these enemies get killed first. During battles with the monster hordes, one possible strategy is to run to the southeastern building where the spider mastermind is, and take the teleporter with exit signs around it. From there, find a safe area and wait until the monsters bottleneck near the southeastern corner of the map. You can then shoot the wall with rockets to incur splash damage on enemies below.

Grab the weapons and lower the lift down. When you grab the box of shotgun shells in the corner, you will be lowered to three Hell knights and a teleporter. Take it to a room full of goodies, as well as a few imps. Outside, there are several mancubi running around, near a bridge structure. To get the yellow keycard, cross the bridge structure east, then south to a small room with imps and a switch. Flip it then run back to the supply room. The bars leading to the northern bridge are up, so cross the bridge and get the key. The wall lowers, as well as another one in the adjacent building, revealing barons of Hell and arch-viles. Now go to the southeastern building, fighting off a couple of barons as well as a spider mastermind. There are two teleporters here; take the one that does not have the exit signs around it to appear on a bridge crossing through the building. Go straight across to acquire the red keycard, but be prepared, as the large wall in front of you will open revealing a lot of monsters, including several arch-viles. When you can, go back to the southeastern building and take the teleporter with exit signs around it. With both the red and yellow keys, press the two switches to obtain the blue keycard, then open the nearby blue door. Enter the teleporter to appear in the northeast corner of the main area. Hitting the switch reveals more of the wall to the north, revealing more monsters. Others will also teleport in. At the far north end is a teleporter that takes you straight to the exit.

The teleporter closet (sectors 17 and 67), houses several various monsters inside. When you hit the switch in the northeastern corner of the main area, the monsters will be freed from this closet, the exception being arachnotrons (on all difficulties except the easiest two), who are too wide to fit between the teleporter lines and the wall. Since they cannot teleport, it is not possible to get a true 100% kills on this map, unless you get the arch-viles to resurrect enemies, which will add to the kill count.