MAP12: Baron Citadel is the twelfth map of 1 Monster. It was designed by "sausage" with later edits by Walter Confalonieri (daimon) and scwiba, and uses the music track "Action on a street" by an unknown composer.

Like all maps in the megawad, the map features only one type of monster, in this case the baron of Hell. It is set in a "citadel" of marble and red brick, with a mix of outdoor and indoor areas. 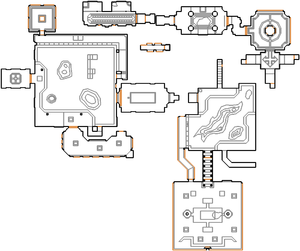 Map of Baron Citadel
Letters in italics refer to marked spots on the map. Sector, thing, and linedef numbers in boldface are secrets which count toward the end-of-level tally.

Leave the starting room, drop down into the courtyard and press the skull switch to open the door to the east. Grab the red key (watch out for the crushers), leave and ride the southern lift back to the ledge with the red door. Enter the door and press the switch at the end of the corridor. This raises the barrier blocking the battlements to the north of the courtyard; leave and ride the eastern lift up to these battlements, press the switch at the end and head on. Enter the teleporter.

In the jail cell, shoot the switch visible on the wall outside, then open the door at the end of this corridor. Move forward and you will end up facing a blown-up wall. Head forward, open the two doors and press the switch to open up a wall. Inside are three pits; you may only choose one. Each leads to the same destination, but has a different bonus pickup inside (west: megaarmor, east: medikit, south: invulnerability). Enter the teleporter in the pit and head on forward. In the next large room the wall in front of you will open, revealing a switch. Press it to open a passage to the north-east which leads to the exit.

In the "jail" area, press one of the switches on the wall to open the door to the second cell; within is a berserk.

* The vertex count without the effect of node building is 2137.