MAP12: Black Rain is the twelfth map of Community Chest 3. It was designed by Matt Cibulas (RottKing), and uses the music track "AimShootKill" from TNT: Evilution. It is the largest level in the megawad, and was the author's first single-player level. It uses NMN Corporation Texture Set Part 1 by Pawel Zarczynski (NMN). 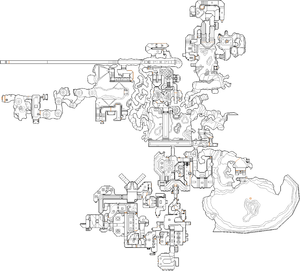 Map of Black Rain
Letters in italics refer to marked spots on the map. Sector, thing, and linedef numbers in boldface are secrets which count toward the end-of-level tally.

The west end of the train area in the north of the map is blocked by a door. At the south of this area is a room containing alcoves that have exposed circuitry at the back of the walls. The sole alcove that you can walk into contains a small green button. Pressing this button will open the aforementioned door, allowing you to explore the stretch of railway until you reach the end, which contains a BFG9000. Be warned that attempting to acquire the BFG, or simply trying to pass any further, will activate a large and inescapable crusher that (should you survive the single, initial crushing) will leave you stuck between a crusher and a hard place.

The dark switches with red lights do not give feedback when pressed. This is because the megawad's SWITCHES lump does not contain entries for these switches.

A few monster storage sectors contain one-time use teleporters, even though they contain more than one monster. This renders pure 100% kills impossible.

* The vertex count without the effect of node building is 15504.

The level originally ended with a teleport into an elevator, which lead to a room where the player had to climb out of a hole in the ground, and activate a switch on one side to enable access to the exit switch on the other. Sarah Mancuso (esselfortium) provided assistance in detailing this final section of the level. However, it was removed from the level before release, as it caused the level to go over Boom's 32767 SEGS limit no matter what node builder was used, crashing the game.

On the automap, to the south of the level, is a message reading "In Memory of Amaster." This is a dedication to fellow Unidoom member Jason Masihdas, who committed suicide on June 14, 2007.