MAP12: Blood Station is the twelfth map of Whispers of Satan. It was designed by Paul Corfiatis, who also wrote the music track for this level, "Running Blood". 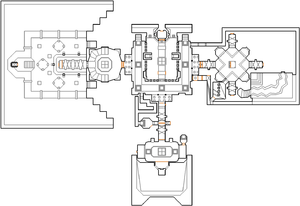 Map of Blood Station
Letters in italics refer to marked spots on the map. Sector, thing, and linedef numbers in boldface are secrets which count toward the end-of-level tally.

When you pick up the super shotgun, enemies will appear from the sides. On the left side is a switch to open the door so flip it. Look out for the demons, and continue into the next hallway. Grabbing the soul sphere traps you in with revenants, so kill them and press the switch to remove the bars, but look out for the Hell knights who spring up afterwards. Flip the switch to lower the lift into the main hub area with damaging blood around it, and take a left. Open the door here to the circular staircase. Look out for the demons as you climb the stairs to the next switch. When you press it, you will be exposed to several monsters outside. Kill them and get the yellow keycard in the shack to the west. Demons will ambush you when you grab it though. Return to the hub area and head for the eastern side this time. Open the yellow door here and enter the room, looking out for the mancubi and crushers here. You need to flip the switches on the north, south, and east sides of the area, and you need to go under a crusher to get to them. Flip all of them and you will be able to access the blue keycard. Demons will ambush you again once you grab it. Kill them and leave the area going back to the hub. Now cross the bridge north to reach the exit.

When you get Secret #3 and attempt to go back, you will find that the passageway got blocked off and a new passageway has been revealed with several boxes of rockets. This passageway spills into the chamber housing the blue key. This could prove beneficial if you have not entered the blue key room from the yellow door, as the crushers will not be activated yet. Thus, you can flip the three switches without danger from the crushers.

* The vertex count without the effect of node building is 2079.