MAP12: Cool Cool Shotgun is the twelfth map of Super MAYhem 17. It was designed by A.Gamma and initially uses the Forest Maze music track from Super Mario RPG, composed by Yoko Shimomura and sequenced to MIDI. Later in the level, the music will change to a MIDI rendition of the Overworld theme from Super Mario World, composed by Koji Kondo. 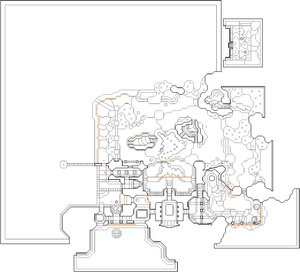 Map of Cool Cool Shotgun
Letters in italics refer to marked spots on the map. Sector numbers in boldface are secrets which count toward the end-of-level tally.

* The vertex count without the effect of node building is 3987.