MAP12: Courtyard of Ruin is the twelfth map of Simplicity. It was designed by Melissa McGee (Agent Spork) and uses the music track "Slow Evil", originally created by Tom Mustaine for Icarus: Alien Vanguard. The par time defined in MAPINFO is 4:30. 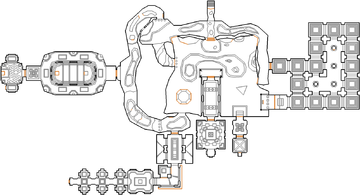 Map of Courtyard of Ruin
Letters in italics refer to marked spots on the map. Sector, thing, and linedef numbers in boldface are secrets which count toward the end-of-level tally.

Take the shotgun and kill the imps and shotgun guys in front of you, then open the door ahead to confront three demons guarding a second door. Open this door to reach the courtyard and kill the imps, shotgun guys, demons and cacodemons waiting outside, then go to the south-west corner of the courtyard to find an entrance to a cave system. Open the wooden door in front of you and kill the enemies waiting behind it, then follow the path south and west to find some shotgun guys guarding a pillar with the blue keycard on it. Continue west into a corridor with a chaingun, watching out for demons, chaingunners and nightmare demons (or revenants on Ultra-Violence and Nightmare skill levels) waiting in the alcoves on either side, then flip the switch at the end of the corridor to lower the pillar you just passed; before taking the blue key, you will need to kill the demons, imps and shotgun guys that teleport in next to it.

Head back to the courtyard, ready to face an imp ambush when you try to open the door leading back to the caves; after killing all the imps, you can open the door and press a satyr switch directly in front of you, which will lower some nearby bars and allow you to proceed further into the caves. Follow the tunnel north past a revenant until you see a skull door on your left and open it to face two shotgun guys and Hell knights, then head forward around an enclosed chamber holding the yellow keycard until you reach a super shotgun in front of another door. Open the door and kill a demon and two chaingunners waiting behind it, then step on the red teleporter at the back of the room to open two compartments containing more chaingunners. Press the button in the south compartment to activate the teleporter, then step on it to reach the yellow key chamber where some demons are waiting; pressing the satyr switch in front of you will lower the pillar holding the key, but watch out for two revenants that spawn behind you at the same time.

Retrace your steps to the caves then head north and east to another satyr switch (requiring the yellow key) that will lower the bars next to it, then continue east and south until you reach another skull door. Open the door to enter a tunnel with sludge pits, which you can follow past various enemies until you reach a rocket launcher in front of a satyr switch. Approaching the switch will cause bars to rise in front of it, and will also lower several walls in the sludge area to reveal a chamber with revenants; enter this chamber and press the satyr switch on the northern-most column to lower the bars blocking your way to the previous switch, then go and press that switch to raise a set of steps in the courtyard below. Go back to the courtyard and head up the steps you just raised in the south-east corner, then open the door ahead to find a mancubus guarding the exit teleporter.

* The vertex count without the effect of node building is 3577.

This level contains the following numbers of things per skill level, not including things spawned via Thing_Spawn or similar functions: