MAP12: Deimos Lab is the twelfth level of console versions of Doom, based on the original E2M4: Deimos Lab. It was modified by American McGee to adapt to consoles' limitations. The original authors of the map are Tom Hall and Sandy Petersen. The map first appeared on the Atari Jaguar, and was later ported to the 3DO, Sega 32X, Game Boy Advance, Sony PlayStation, and Sega Saturn consoles. 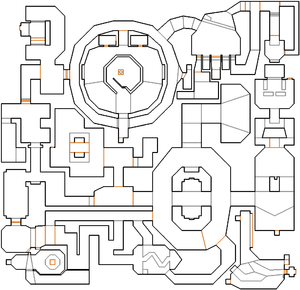 Map of Deimos Lab
Letters in italics refer to marked spots on the map. Sector, thing, and linedef numbers in boldface are secrets which count toward the end-of-level tally.

You start in an empty room with a teleporter in front of you. Go forward and step into the teleporter to enter a new area. Go through the doorway on your left and run straight forward through two damaging nukage rivers and an oval structure. Once you are across, keep going forward down the hallway, turning right, left and left again to a wooden door. Go through the door to face a demon on I am a Wimp or Not Too Rough skill levels (IAAW/NTR) or baron of Hell on Hurt Me Plenty or Ultra Violence (HMP/UV), and press the switch in the south-east corner to lower a lift. Take the lift to the upper level and take the blue keycard at the top.

Drop back to the lower floor and go back through the wooden door. Go forward into a room with red walls, and open the blue door at the opposite end. Go through and turn right to see the yellow door in front of you. Turn left and head straight forward past a marble brick structure. After passing it, turn around and enter the next room containing the yellow keycard. Taking it opens a nearby door containing a shotgun guy, plus a demon on HMP/UV. Kill them and press the switch they were guarding to open the south door so you can escape.

Go through the door you just opened and head through the yellow door in front of you. Follow the corridor behind it to the left until you see a lift on your right. Drop down into a round red room and head around the large octagonal structure in front of you. You can enter this structure through its south side; go into the center and step on the square platform with the soulsphere. Leave the structure and you will see that a wall in front of you has risen, revealing a teleporter. Go through it to a hallway with a scrolling skull texture.

Head down the hall to a lava pool and drop into it. Immediately turn left and head to a small platform with a teleporter; before going through, press the switch on the opposite wall to raise a bridge to the exit door. Step on the teleporter to return to the large round room you were in earlier. Step backwards into the teleporter behind you to return to the exit area, cross the bridge you just raised to reach the exit door, kill the imps behind it and press the switch to finish the level.

Instead of going through the nukage rivers near the start of the level, step into the nukage and go to the north side (opposite the door to secret #3). You will find an alcove containing armor and a berserk pack.

After crossing the nukage rivers, head into the doorway on your right and then go left into a large room. This area contains numerous enemies and pickups, including armor behind a short green pillars and a box of shells in the south-east corner. Entering the room causes the floor to rise behind you which traps you inside; press the switch in the south-west corner to escape.

After collecting the blue keycard, press the switch on the south wall to lower the floor in front of you. Head east down a passage and you will find a curved bridge; on the other side of this bridge is a radiation suit, box of shells, two rockets and an energy cell.

In the room with the lava pool and five wooden doors, opening the central door leads to a dead-end with a medikit and box of shells. Approaching these items opens the doors on either side, revealing demons on all skill levels and cacodemons on HMP/UV.

Compared to the PC version, aside from simplification of level geometry, the following changes have been made: