MAP12: Deja Vu is the twelfth map of 32in24-5, a deathmatch megawad. It was designed by Andrew Wood (Catoptromancy) and Worst-vd-plas, and uses the music track "Shawn's Got the Shotgun," originally composed by Robert Prince for Doom II. 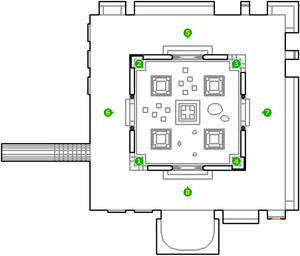 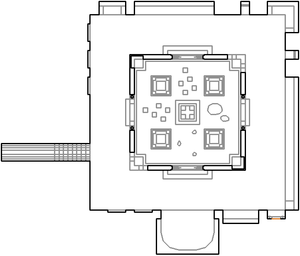 This map is a small courtyard that forms a playable area of a 1408 unit square. Each corner of the map contains a super shotgun, and a shotgun can be found in the south-east corner, next to the exit switch. In the centre of the courtyard is a ruined structure, with four square platforms in each corner to be used as cover, as well as smaller plinths for the players that spawn here. This central structure contains no weapons, save for the berserk pack at the centre. As a result, the players that spawn outside the structure have a significant advantage over those who spawn inside. The level contains no health apart from the berserk pack, and no armor.

* The vertex count without the effect of node building is 706.