MAP12: Dormitory Sector is the twelfth map of Project Einherjar. It was designed by Mike MacDee (Impie) and uses the music track "". 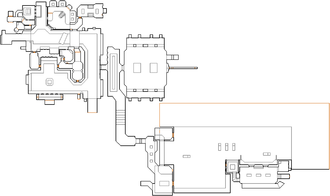 Map of Dormitory Sector
Letters in italics refer to marked spots on the map. Sector, thing, and linedef numbers in boldface are secrets which count toward the end-of-level tally.

This small city block is a residential zone for White Hell's staff, and is filled with an oppressive number of troops. Fight your way through the first building until you come to the balcony. Drop down and enter the central building, which has three doors leading into it: once you open the doors, a horde of enemies will pour onto the street from either end of the sector, sandwiching you. There is an elevator here with a blue lock: the key is on the upper level of the small lab across the street, accessed via door switch.

Another wave of enemies pours in after you access the elevator. Go upstairs and retrieve the yellow key, which opens the door beneath the large Valkyrie Guard symbol. This building is a long hall of sealed doors: the only available room to explore is the large laboratory, where you have your first encounter with Veidt: she laughs and flees the lab shortly before unleashing four Einherjars on you. Use super stims, rockets, and any missile pods you have handy to destroy them all and escape the lab. The sealed door at the top of the stairs is now open.

This leads through another lab to an outdoor area and a small warehouse. The upper level of the small lab has a switch that opens the warehouse doors: go inside and up the stairs, then flip the switch to open the exit door and unleash a Thor Einherjar. He merely blocks your path to the exit switch, so lure him outside to kill or evade him.