MAP12: Entropy is the twelfth map of Alien Vendetta. The first few rooms were designed by Adam Windsor, with the rest of the level designed by Brad Spencer. It uses the music track "The Imp's Song" from Doom. It consists of three separate maps originally intended for a project to remake Doom II's levels to fit their titles. The three remade maps were: MAP01: Entryway (designed by Windsor), MAP02: Underhalls (after the slow elevator in Entryway), and MAP03: The Gantlet (after the teleporter in Underhalls). The par time defined in the executable is 7:40. 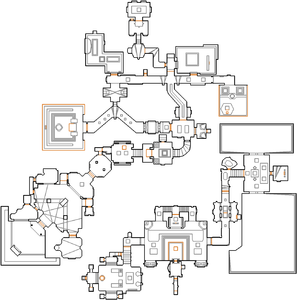 Map of Entropy
Letters in italics refer to marked spots on the map. Sector, thing, and linedef numbers in boldface are secrets which count toward the end-of-level tally.

Some zombies are in front of you at the start, so kill them and head into the next room. Here, there is a room to your left, a room to your right, and two lifts that will take you up to the next floor in front of you. Go to the room on your right for a super shotgun, and go to the room on your left for ammo. Now take the lifts to the next floor and enter the next room. Here, take the lift up and in this room is another super shotgun. Attempting to grab it causes two revenants to teleport in. Now keep going east, down the lift and then down the staircase to the next room. Here, you need a blue key to proceed to the rest of the level, but the red key is optional.

To get it, take the west door and go all the way west. Through the next door is a room with a nukage column. There is a switch behind this column, where you can lower the column revealing a red keycard. For the red door, head into the main hall in this area to a four-way intersection. Go north, then west following this path until you find the red markings. Open the door and press the switch to lower the lift to various supplies.

For the blue key, head into the four-way intersection, and go north, then east (alternatively, go east and north through the first door). In this room, head behind the computer panel and find the switch, then return to the intersection. Go west, and through the northern door to another computer room. In the back of the room, the blue keycard should be available. Now return to the blue door by going back to the intersection and heading southward. Use the teleporter behind the blue door to go to the next area.

Head through the next two doors and you should see a megasphere in a dead-end room. Picking it up surrounds you with enemies. Run to the west, into the next hall into a room with the yellow keycard. Picking it up exposes you to chaingunners however. It might be a good idea to get through Secret #8 and #9 before picking up the key. Now go back to the room with the megasphere. There might be a lot of monsters to contend with in this room. What you need to do is head through either north path up the stairs to a control room where a yellow switch will reveal itself. Press it and the eastern path will open. On this eastern path, be careful of a genuine trap, then go through the next door through the hall into the penultimate room. Just entering this room is enough for some extra monsters to teleport in so be ready. Then you can exit the level. Note there is a berserk pack behind the exit switch.

* The vertex count without the effect of node building is 2634.