MAP12: Entryway on Earth is the twelfth map of Doom 2 Unleashed. It was designed by Walter Confalonieri (daimon) and uses a custom music track.

When using the music WAD included with this megawad, this level instead uses the music track "Can You Feel the Entropy?" by James Paddock (Jimmy). 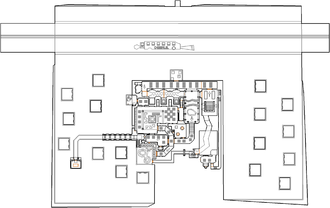 Map of Entryway on Earth
Letters in italics refer to marked spots on the map. Sector, thing, and linedef numbers in boldface are secrets which count toward the end-of-level tally.

Go round the corner and open the door on your left to reach a passage with a grated floor. Follow the passage round past some zombiemen and open the door at the end, kill the zombies and shotgun guys waiting in the next room then go through a smaller door in the north-east corner to find a switch guarded by more zombiemen. Return to the previous room and head through the north-west door which has now opened, turn left to go through another door leading to a balcony and press the switch in the corner. Go back to the larger room to find that the pillar in the middle of the floor has lowered so you can collect the yellow keycard.

Go back to the passage with the grated floor and follow it until you see a silver door on your right, which requires the yellow key to open. Kill any waiting zombiemen and press the switch in the south-west corner, then leave the room and head east through another door that has now opened. Pass the waiting zombiemen and go down the steps to a small courtyard containing imps, then head through the north-west doorway and follow the walkway over the sludge, watching out for an ambush by one or more demons on the way. After crossing the bridge, lower the lift at the end and ride it up to a long tunnel with two zombiemen. Follow the tunnel east until you hear a door open behind you - this leads to a balcony with the blue keycard, which is guarded by a shotgun guy and an imp.

Go back to the long tunnel and head all the way east to a door with blue key markings. Go through it and kill the waiting zombiemen and imps, then head south around the blue structure to find a room with a zig-zag walkway over nukage. Follow the walkway (passing several zombiemen on Hurt Me Plenty (HMP) skill level or higher) and ride the lift at the end down to a narrow tunnel, and follow this until you reach a door leading to a small courtyard under the starting point. Flip the switch in the north-east corner to open the nearby exit door, then go through to find shotgun guys and a chaingunner guarding another switch. Throw this switch to lower the floor behind you, drop down to collect a radiation shielding suit and follow the nukage stream until you reach another exit door. Flip the switch next to the door to open it and reveal a lift, which will carry you up to a teleporter - step into the teleporter to finish the level.

After stepping on to the balcony with the blue key, backtrack to the lift you used earlier to find that a hole has opened in the west wall. Step through it to find a computer area map behind a grate.

The lift past the zig-zag walkway cannot be activated from below. In single-player this makes it impossible to return to the rest of the level once you have passed this point.

This level contains the following items in deathmatch and cooperative:

* The vertex count without the effect of node building is 7269.