MAP12: Entryway to the Worlds of the Ancients (Perdition's Gate)

MAP12: Entryway to the Worlds of the Ancients is the twelfth map of Perdition's Gate. It was designed by Tom Mustaine and Jimmy Sieben (Evil Genius).

Plot: You step off the teleporter pad and see what appears to be a structure floating in space. You have no way back. Time to find out where you are. 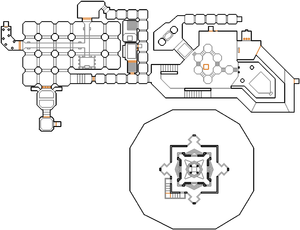 Map of Entryway to the Worlds of the Ancients
Letters in italics refer to marked spots on the map. Sector, thing, and linedef numbers in boldface are secrets which count toward the end-of-level tally.

There's nothing of interest in this floating structure, so head straight to the teleporter in the south west corner to be taken to the level proper.

Shoot the demon when you land and head up the stairs where you will find a large number of zombies and imps approaching. At the top of the stairs, take a right to a T junction where you need to take the right turn into a brown brick area. Though you might catch the attention from some of the bad guys down the left corridor as you do.

You will be presented with two sets of stairs almost immediately, one going down into a pit, the other going up to a ledge that runs around the edge of said pit. The end of the ledge and the pit both have switches you need to press to raise platforms. The switch in the pit can be found on the north side and will raise a bridge to the maps red key, whilst the switch down the end of the ledge will raise a structure in the pit allowing you to ultimately reach the blue key. Note the blue bars next to the later switch.

With both switches pressed, head back toward the teleporter you entered the map from, but instead of going down the stairs to it, keep going (i.e. you went right at the top of the stairs earlier, now you are taking the other route). Ultimately you will find a rocket launcher and a door.

Open the door to reveal a water filled area and a wooden bridge that leads across it to the red key (you raised this earlier). Red key in possession head to the south west corner of this area to find the red bars. Note the bridge extending to the yellow door on the west side of this area.

Open them and head up the stairs, watching for the bad guys that teleport into the water area behind you and use the teleporter at the top to enter a new brown area that when you follow around leads you to a ledge overlooking the already visited brown pit. From here you can jump onto the structure you created earlier and use it to reach another ledge over the other side, where you can find the blue key.

Head to the blue bars and grab the yellow key behind them. Finally head back to the water area, open the yellow door, behind which you will find the exit around the corner.

* The vertex count without the effect of node building is 1467. 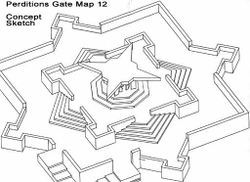 Bob Mustaine first sketched out the teleporter device in AutoCAD. The area was originally going to be a grassy ruin, but was changed to a pillar floating in a black void due to the skybox not matching.[1]