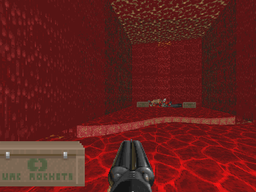 Face to face with a Spider Mastermind

MAP12: Great Halls of Fire, designed by Yonatan Donner, is the twelfth map of Hell Revealed. It uses the music track "Run Like Smeg" from Rise of the Triad.

The beginning of episode 2 is not very hard - you can take a breath, and you should, because after that you will not have many levels in which you won't have to spend every moment fighting for your life. Enjoy it while you can! Kill the barons in the super shotgun area quickly, this fight is still one of my favorite ones. 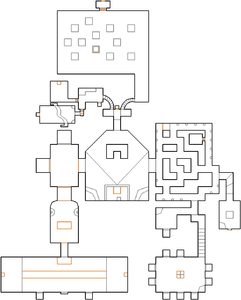 Map of Great Halls of Fire
Letters in italics refer to marked spots on the map. Sector, thing, and linedef numbers in boldface are secrets which count toward the end-of-level tally.

Grabbing the chaingun at the start reveals a lot of imps in a large room. In this large room, start by going to the east path. In this maze-like area with former humans, make your way to the easternmost end, where you will find an arch-vile. Make sure to kill him, and then press on the lion marking behind where he was, which functions as a switch. In this maze-like area, you can also go southwards to get a super shotgun, and face off against several barons of Hell. Return to the main room and head west this time. When you enter the room with the blur artifact, closets with arachnotrons will open. If you enter the southern closet, it will lower into another room, where you will find some pain elementals on the other side of a scrolling wall. Also behind the scrolling wall is a passage leading to a lava-filled room. If you had pressed the lion marking before, there will be a bridge you can cross here, where you can go on both sides to get a yellow skull key and a computer area map, but watch out for the monsters in this area. After getting the key, return the main room once again and go north, at the next fork, take the left path with ammo clips. Up the steps will be some Hell knights, so kill them and find the yellow door. Grab the plasma gun and press the switch to descend, where you will face a spider mastermind. Kill him and grab the red skull key, then teleport out. Go back to the fork and then take the stairs on the right with shotgun shells, into a large chamber with red pillars. Look out for the Hell knights and cyberdemon as you reach the red door that has the exit switch.