MAP12: Hydroponics is the twelfth level of Icarus: Alien Vanguard, set inside the hydroponics wing of the Icarus. It was designed by Gary Gosson and uses the music track "Star 2" by Jeremy Doyle. 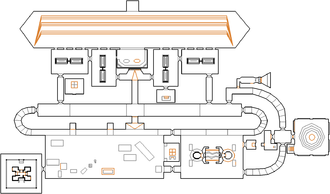 Map of Hydroponics
Letters in italics refer to marked spots on the map. Sector, thing, and linedef numbers in boldface are secrets which count toward the end-of-level tally.

Take the berserk pack and teleporter at the beginning. When you arrive, quickly run straight across as fast as you possibly can, as barrels will explode around you (If you have trouble with this part, try to enter the teleporter from the northwestern side). After you pass it, go to where the shotgun guy (or zombieman on Hey, Not Too Rough or lower) was and flip the switch on the panel he was on. This raises a crate in the crate room to the west. Now go to these crates and clamber up until you reach the chainsaw, then head west into the computer room. Enter this area via the northern entrance, and press on the monitor directly ahead to reveal a shotgun guy. Press the wall behind him to reveal a condensed area with chaingunners and lost souls. Search this area for the yellow keycard, and leave once you have it. Head back into the cargo room and press the brown crate to lower it. Enter the open door in the southeast of the crate room. Go around the pump here to the northeastern door and take it to a teleporter. Use it to appear in a three-way fork. Head east through two rooms with dark plants in them, and make your way to the open door to the south. Kill the Hell knight as you move down the hallway, and kill the next two you see to the right. Turn around to see two more doors, take the left one (not the one you came in though), this should have a mancubus and another hallway. You will see the "SIMU EXIT", but you need the red key in order to exit, so ignore it and keep going downstairs until you reach a square room. Head through the yellow door here to reach what appears to be a reactor. Find the switch in the southwest corner and flip it to activate the reactor. Head back into the square room to see that the other door is open all the way. Kill the revenant and spectres in this room and use the blue pillar to get a soul sphere. Then, teleport and you will end up back inside the computer room. A new area has opened here, which had a half-open door previously. Head in and press the switch, and then press the switch in the second new area that opens behind you to open your way out of this area. Look out for the arachnotrons, then return to the three-way fork, via the same teleporter you used before. Head east again, and you will notice that the door to the south is open with spectres and a switch. Flip this, return to the three-way fork, and head west into the first plant room here (also note that the plants have now lit up). In this room, there will be an opening to the northeast, so enter it to find a revenant, a megasphere, and the red keycard. Grabbing the keycard locks you in the room for thirty seconds, however, if you look outside, you might notice you could be getting fired at. This is because of a Hell knight (or an arachnotron on Ultra-Violence or higher) is attacking you through an invisible wall outside. When the door opens, head back to the "SIMU EXIT" and proceed to the next map.

In the pump room east of the cargo room at the beginning, go to the southeast part of the pump to find a switch. Flip it and run to the other side of the pump to find a lift with barrels. Destroy them and get on the lift to ride up. Go around here until you hear a lift lowering where you will confront a Hell knight (or a baron of Hell on Ultra-Violence or higher) guarding a soul sphere, a plasma gun, and some energy cell packs.

A stimpack (Thing 135) in the south near the rocket launcher has no flags set for any of the three difficulty classes, so it does not actually appear in the level.

* The vertex count without the effect of node building is 1434.