MAP12: Imprisoned is the twelfth map of Plutonia 2. It was designed by Kristian Käll (Kristus), Sam Woodman, Pedro Arturo Gomez Blanco (PAGB666) and Thomas van der Velden, and uses the music track "Under a Crimson Moon" by Eric Baker (The Green Herring). The par time defined in MAPINFO is 2:30. 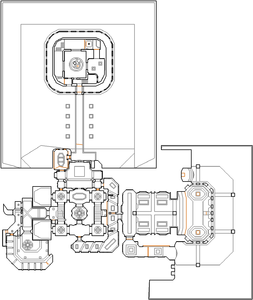 Map of Imprisoned
Letters in italics refer to marked spots on the map. Sector, thing, and linedef numbers in boldface are secrets which count toward the end-of-level tally.

At the start, gather up your belongings and head for the western passage. There is a chaingun to the left, and the side passage leads to an underground area where you will acquire the blue keycard. Look out for chaingunners that ambush you, then return to the starting room. Flip the blue switch at the south end, and kill the cacodemon as well as the demon that appears from behind. Follow the passage behind the switch until you find a large room filled with monsters. Kill all of them and proceed to the switch in the back. Hit it and grab the rocket launcher, then go back where you will see an open door on your left. Go through it, and go outside and around the building for the yellow keycard. Many monsters will teleport in to try and stop you, so kill them on your way back. Once you are back in the large room, open the yellow door near the entrance of the room. Flip the switch at the end of the hall to lower a box of bullets. The platform lowers into a new room with monsters, so dispose of them. Enter the northwest room and shoot down the mancubus, then head outside. Cross the bridge to the next building you see, but look out as towers will rise up with chaingunners teleporting onto them. In the large UAAF silo that is on the other side of the bridge, you will see that the path to the left is blocked up, so climb the steps up and take the long way, dropping down into the exit room when you finally reach it.

* The vertex count without the effect of node building is 2853.