MAP12: King Arena is the twelfth map of Kama Sutra. It was designed by Adolf Vojta and uses "Infinite", the music track from TNT: Evilution MAP10, composed by Tom Mustaine.

Third and the last map I took from my original mapset for doom1. It went through many design changes but the main things stayed in the same way. It's a tyson map including only SSG for the end and also some puzzles I am proud of.

In single player, this map is devoid of all weapons except for the chainsaw, super shotgun (can only be obtained via a secret) and the rocket launcher (ITYTD skill only). 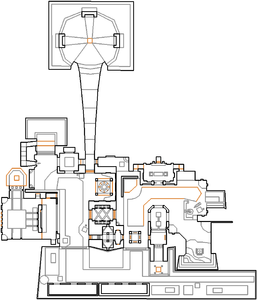 Map of King Arena
Letters in italics refer to marked spots on the map. Sector, thing, and linedef numbers in boldface are secrets which count toward the end-of-level tally.

* The vertex count without the effect of node building is 1713.