MAP12: Magenta Heat is the twelfth map of Ancient Aliens. It was designed by Paul DeBruyne (skillsaw) and uses the music track "Web of Steel," composed by Stuart Rynn (stewboy). The par time is 3:00. 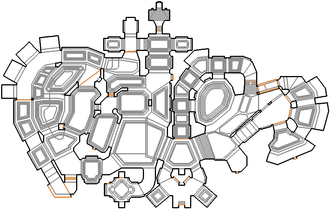 Map of Magenta Heat
Letters in italics refer to marked spots on the map. Sector numbers in boldface are secrets which count toward the end-of-level tally.

You start out in a nook with two shotgunners and an alien guardian in front of you. Grab the shotgun and deal with these as well as two imps and another shotgunner in the space behind you. Head to the back of the room and hit the switch to raise the walls out, including a pair of stealth plasma aliens now flanking you. Head to the northeast and up the stairs. After walking under the archway, more walls will drop in the room you're in. Press the switch in the southern space that contained the revenant and continue down the newly formed stairs. Walking through the hall will open the path in front of you, and through the door will drop the bars to your right. Head through here and follow the balcony to grab the blue key.

Jump off the ledge and make a right-handed u-turn, then turn left before the yellow door. The end of this hallway has the blue door, so enter it and deal with the chaingunners here. You can grab the rocket launcher and rockets inside, but your goal is the switch in the southern room. This will open a door right behind you, and out here is a switch that will raise a path to the red key. Grabbing the key will spawn an ambush, so deal with them and head through the red door to the south.

Follow the path here along the balcony, dealing with hitscanners, imps, and a Hell knight. At the end of the path is the yellow key. Grabbing this will lower the floor and expose you to some more hitscanners as well as an archvile. From here, just head left and curve around through the yellow door to the exit.

This information was last verified in its entirety on February 28, 2021.

* The vertex count without the effect of node building is 2529.