MAP12: Militant Reprisal is the twelfth map of Requiem. It was designed by Ian Quick, and uses the music track "Breach of Madness" (now titled "Mesmarine") by Mark Klem, also the megawad's text screen music.

A large military base that guards the entrance to the Town of the Dead - it promises to be heavily guarded by its slain defenders. As usual, you must wade through the mutilated corpses of your seemingly limitless enemies to reach the exit. 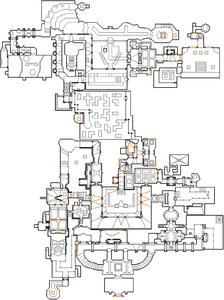 Map of Militant Reprisal
Letters in italics refer to marked spots on the map. Sector numbers in boldface are secrets which count toward the end-of-level tally.

Walk downstairs to a big room here and then open the door to the right. Head down this hallway and take either side path up to a switch. This will open up one of the doors to the big dark room. Then press the lion switch nearby and then enter the big dark room. Climb up the stairs to the top and you will find a switch nearby. This is actually a light switch. You do not need to press it, but it is there if you want to brighten up some of the hallways. Now go through the southern door. Head right at the fork, and you can either take the long hallway to your right (catching a glimpse of the exit door as you do) to the stairs, or you can press the switch on the left and ride the lift down to reach the stairs faster. Either way, take the stairs down and you will find a flooded room with lots of crates. Be careful of the chaingunners who ambush you from behind, then enter the water and cross to the other side. Go through the hall all the way south until you reach a big techbase-styled room. Approach the lift to the northwest for it to lower. Ride it up, then open any door up here to reach the exterior hallway. You now have a choice of two paths, left and right. For both paths, you need to take the northern doors, as the side doors cannot be opened except through the paths themselves. You need to go through both paths to get through the level.

Left path: Open the northwestern door and follow this path all the way to a room with a chaingunner inside a V-shaped wall. There is a door here leading back to the exterior hallway if you needed anything previously. Otherwise, approach the southern wall of this room to open it. In this large room, approach the bars to the south to open them. Past those is a walkway, which connects to the right path. If you already have been in the right path, skip past the next section, otherwise, take the teleporter that is through the passage on the east. You will appear in front of the door that leads to the right path.

Right path: Open the northeastern door and kill the zombies as you follow the path eastward. In the open area with the walkway and the switch, do not bother with the switch as it does not net you anything (it is supposed to give you access to a secret, but it is unfortunately bugged). You can go behind the faceted wall here to find a door leading back to the exterior hallway, otherwise, go south to the water and drop down. In the next watery area with a demon and imps, you might see a light arrow in the water pointing to the left, and if you do not see it, there is a light arrow in the subsequent hallway. Follow this hallway and you should find a switch with some chaingunners guarding it. Press this switch and go through the hallway seeing a light arrow pointing to the west this time. You can either head all the way down this hallway, following the path to some bars, or take a detour to the left where Secret #18 is and then going down the stairs on the opposite side. Either way, approach the shotgun to make the bars lower, and then head out onto the walkway above the water. If you have not finished the left path yet take the teleporter that appears in the passage on the western wall and then go to the section above this one. Otherwise, read on.

When you are finished with both paths, the bars to the southwestern section should be open. Go through the door here to a teleporter. When you emerge, you will be in a new area similar to Command Center. Open the bars barring the path ahead by heading through the middle of the columns (this also lowers the columns and you may fight barons of Hell here). Follow this hallway until you reach an area with nukage falls. Stay on the solid ground as much as you can, heading into the room with the yellow keycard. When you get it, drop down the nukage falls and make your way east all the way to the blue key (if you did not get the yellow key, there will be bars blocking access to the blue keycard). After grabbing the key, you will teleport back to the hallway that contained the exit door, which requires the blue key. Open this door, kill the baron of Hell (or Hell knight), then approach the wall to reveal the exit switch.

Because of the great number of Things in this level, attempting to save your game in vanilla Doom II on this level will cause the program to crash.

Although there is a yellow key present, there are no doors in this level that require one.

As three of the secrets cannot be reached due to design errors, only 86% Secrets can be obtained.

Because the three health bonuses in Secret #17 cannot be accessed along with the secret, only 95% items can be obtained in the map.

* The vertex count without the effect of node building is 5110.

In terms of file size, this level is the largest in Requiem, totaling 724 KB when extracted from the WAD.