MAP12: Mines is the twelfth map of Beta 64. It was designed by Antnee. 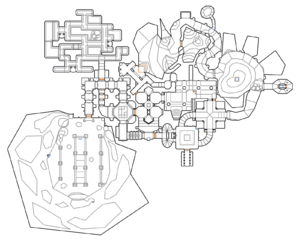 Map of Mines
Letters in italics refer to marked spots on the map. Sector, thing, and linedef numbers in boldface are secrets which count toward the end-of-level tally.

Secret exit: After obtaining the yellow key, make your way back to the room from where you accessed the backpack secret, as that is where the yellow door is located. Go through it and kill the baron guarding the secret exit to be taken to MAP31: Irradiated.

* The vertex count without the effect of node building is 3110.