MAP12: Nectar of the Gods is the twelfth of Community Chest 4. It was designed by Eric Baker (The Green Herring) and uses "It's Gonna Be A Rough Ride," a music track he composed specifically for this map. 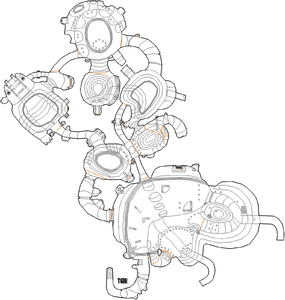 Map of Nectar of the Gods
Letters in italics refer to marked spots on the map. Sector, thing, and linedef numbers in boldface are secrets which count toward the end-of-level tally.

The Green Herring's sole map contribution to Community Chest 4 is a network of water-filled caverns. The design theme of the level, however, stands in huge contrast to its encounter theme - heavily trap-oriented, with a focus on arena encounters and causing monster infighting. While it packs a mere 194 monsters on solo Ultra-Violence and above, don't let your guard down - what this map lacks in monster count (relative to the last two maps), it makes up with putting you in crossfires between tough monsters.

Like MAP10: Inner Fear, this map packs "delayed tripwire" teleport traps, so don't assume that areas you are visiting for a second time are safe!

You begin in the bottom of a shaft, in a rock tunnel. Grab the super shotgun and sets of 4 shotgun shells. Head round the bend in the tunnel, and you will find two chaingunners waiting at you. Line up the super shotgun and fell both of them with a single blast, then loot their chaingun for yourself.

By now, you will have awoken a whole horde of monsters in a large, water filled outdoor area in the north. For brevity, we will call this the "starting cavern". There are a wide variety of monsters out there in this cavern - imps, shotgun guys, cacodemons, arachnotrons, Hell knights, mancubi - even a cyberdemon on cooperative multiplayer. Grab another chaingun and a shotgun from behind the two rock fragments just ahead, then maneuver around the cavern, causing the different types of monsters to hit each other and initiate monster infighting. Of course, you will have to use your weapons to finish off the stragglers - usually the cacodemons or mancubi.

When the coast is clear, flip the switch in the north of the starting cavern, then get out your rocket launcher (if available from previous levels). A panel in the west of the cavern will lower, revealing up to five revenants. Rocket fire should be able to take them out easily. Once they have been disposed off, head into the tunnel that they appeared from. Follow this tunnel into the first of five water-filled caverns you will encounter in the course of this level. We will call this "Southwest Cavern" based on its position in the level, and name the other caverns correspondingly.

As you enter Southwest Cavern, the platform you enter the cavern on sinks into the water. You are placed in a crossfire between three mancubi in the southeast and four cacodemons that teleport onto the platform in the northeast. Move the cacodemons into the lines of fire of the mancubi, and you can initiate some monster infighting to lighten the burden on you. Once the victors of the infighting have been finished off, head to the southeast of this cavern and flip the switch. This changes the water levels in the waterfall in the north, forming a watery passage which you can climb up.

Head up this watery passage towards a large cavern with a grey stone structure (Western Cavern). As you approach, you will be attacked by up to 10 cacodemons (eight cacodemons and two pain elementals on Ultra-Violence and above). On your way towards Western cavern, you will also notice two alcoves with blue torches in them. Once you cross between these two torches, immediately backpedal to the middle of the watery passage - two traps will open behind you, one with three shotgun guys and another with a chaingunner (shotgun guy on Hurt me plenty and below). Backpedaling keeps these monsters in front of you and lets you get the jump on them, and not vice versa.

Backtrack to Southwest Cavern. A set of steps will have appeared in the north, allowing you to climb up to the platform in the northeast. Flip the switch on this platform to lower a nearby wall. Two cacodemons will emerge from a small connecting rock passage. Head through to another cavern with the blue key on a rock perch (Southeast Cavern). You will first be attacked by three demons - no big deal. Head into the tunnel in the north and watch for three revenants at the end. Flip the switch here to raise steps to the blue key on its platform.

Ostensibly, this switch also triggered a trap in the south of this cavern, with three shotgun guys. However, that is not the real trap in this cavern. The switch also primed a delayed-action tripwire teleport trap. When you head back into the middle of this cavern, five Hell knights will teleport in in front of you, while three demons appear behind you. Move to the southeast to avoid getting boxed in, and deal with the demons quickly to get some breathing room. Once you have cleared out the enemies, climb up the steps in the south and grab the blue key.

You now need to backtrack through Southwest Cavern to the starting cavern. Stairs will have formed back in Southwest Cavern for you to climb back up to the tunnel between it and the starting cavern. In this tunnel, beware of two new traps along the left wall, with three and four demons respectively. When you head back into the starting cavern, another delayed, tripwire teleport trap will activate, populating the starting cavern with three arachnotrons, three mancubi and seven cacodemons (four cacodemons and three pain elementals on Ultra-Violence and above). Clear them out, then head to the east of the cavern. There is a button in front of a blue skull bar. Press it and it will lower the bars blocking access to the river in the east. At the bend, beware of two spectres, then collect the armor and ammo if needed. From this point on, be careful. There are three "front and back" teleport ambushes in the next segment, and you should be prepared for monsters to teleport in without warning.

The first teleport ambush occurs as you complete climbing up the water/rock steps and arrive at the lower of two rock platforms. This one causes five Hell knights to teleport in front of you, and two demons to appear behind you. Clear out the demons first, pull back and then take down the Hell knights. As you continue west across a waterfall and around a bend, you will come to a tunnel with stone steps. The second teleport trap is triggered at the bend in this tunnel, causing three imps to teleport in behind you and five cacodemons to teleport in front of you. Kill the imps and back off, but beware of the cacodemons ability to directly chase and attack you from the upper rock platform. The third, largest teleport ambush is triggered shortly after, when you climb to the upper of two rock platforms. Three demons teleport in behind you, seven Hell knights teleport into the southeast of this platform and 16 imps teleport to the perimeter, including some right in your face. Again, kill the demons to make space, pull back, and then deal with the rest of the monsters.

On the upper rock platform, flip the switch in the southeast to raise large stone blocks in the water of the starting caverns and a new tunnel ahead. Run across the blocks and into this tunnel. Collect the rocket launcher and rockets inside. Continue along this tunnel to reach yet another water-filled cavern (Northeast Cavern). This one has four arachnotrons and up to six cacodemons and three pain elementals (pain elementals on Ultra-Violence and above only). Head to the southeast corner of this cavern, where you will find an extension with two Hell knights waiting in ambush. Head into it and flip the switch they were protecting. This switch raises a stone wall in the north of the cavern, forming another watery passage. Head through here, and prepare for a nasty finale to the level.

The final cavern (North Cavern) is quiet - too quiet. It also has a megasphere in the middle. In fact, it also has four medikits - quite a lot of healing. You will need them, and that's all the healing you are getting for this last series of encounters, so make it count. As you enter North cavern, make a dash for the megasphere and pick it up. Shortly after entering the cavern, up to six chaingunners and eight Hell knights (revenants on Ultra-Violence and above) will teleport into the upper reaches of this cavern. With little cover available, you need to take out the chaingunners first as you can't dodge their attacks, followed by the other monsters.

Some time after the engagement has started, the waterfall in the south will lower, revealing a water-filled circular cave to the south. This one has five mancubi (six on Ultra-Violence and above). Clear them out and flip the switch in the south of this cave. This causes 10 Hell knights (10 revenants on Ultra-Violence and above) to spawn into North Cavern, and they will make a beeline for you. Quickly kill them before you are overwhelmed.

When you return into North Cavern, you will notice that three more stone pillars have appeared along the perimeter of the cavern, forming a staircase of sorts. Climb from the easternmost rock pillar up to the one in the southwest, then enter the tunnel ahead. At the end, you will be attacked by two demons and three revenants (three arch-viles on Ultra-Violence and above). Step into the portal of fire to end the map. 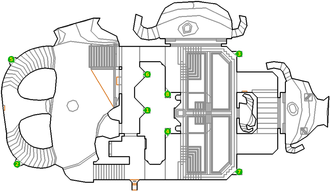 This level contains its own, separate deathmatch arena based on Baker's MAP24: Auf Wiedersehen, Sonne from 32in24-11: Occupy Doomworld. It is identical in gameplay and appearance to the original version, except for the addition of an exit to the south of the level. It can be accessed by opening the door manually or simply approaching it.

* The vertex count without the effect of node building is 7269.

This was Baker's third attempt to make a level for the project, initially registered for MAP14. His first attempt, a level set in a complex within a vast nukage ocean with Jade Ocean and Sea of Corruption as possible titles, was lost in a hard disk crash in 2009. His second attempt was a techbase speedmap provisionally titled Base Durazna (Spanish for "Peach Base"), which was completed but ultimately scrapped for being too generic. The third and final attempt was started in May 2011 and completed in June 2011. It was later moved to MAP12 when the levels were sorted.