MAP12: No Tomorrow is the twelfth map of Community Chest. It was designed by Mike "Use3d" Alfredson, and was inspired by Doom II MAP12: The Factory[1]. 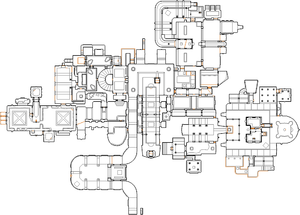 Map of No Tomorrow
Letters in italics refer to marked spots on the map. Sector, thing, and linedef numbers in boldface are secrets which count toward the end-of-level tally.

Open the southeast door. Go all the way to the west, and flip the switch. Go around, and hit the next switch. Return to the first room, and step into the eastern alcove; the walls will open. Run to the skin pit in the east, and hit the switch on the east side of the center pillar. Quickly open the western door, and run to the western lift. Take it up, and open the southern door. Step onto the thin walkway, and shoot the button on the pillar. Follow the walkway over to the red key, and then leave the building. Be careful when navigating the walkway; if you fall in, you will be unable to escape. Return to the first room, and open the northeast door. Run all the way west, and then north. Go up the eastern staircase. In the next room, trigger the lifts with the southern switch, and take either of them up. Enter the central hall, and then jump west to the other platform. Run west, and the wall will open. Go around the path, and hit the switch. Backtrack to the lifts, and head through the western door. Run around and hit the switch at the end. Return to the previous switch, and go downstairs to the south. Go to the southern corner of the bars, and shoot the button on the southern side of the pillar. Navigate the walkway, and grab the yellow key. Backtrack to the lifts, take the southern lift up, and open the yellow door to the south. Jump down the hole, and open the next door. Flip the northern switch, and enter either one of the southern doors. Flip the switch in the side you enter. Do the same for the other side, and hit the newly revealed switch to the south. Reenter the hall, and leave through the western door.

Run to the west of the area, and flip the switch to open the windows. Before the windows close, face the switch in the southeast of the opposite room, and shoot it. Go through the northern doorway, and run down either one of the western, curved stairways. Open the door, go north, and then open the eastern door. Flip the switch, and enter the sewage tunnel through the northeast opening. Go west, and then south. Flip the switch, and go in the southwest opening. Open the door at the south end of the tunnel, and take the lift in the next room. Open the southern door. Go west, then south, west, north, east, and south across the walkways and over the gaps. Go upstairs, open the door, and pull the western switch to open windows. Shoot the skull switch in the south once it shows, and the bars to the north will open. Flip the red switch, go back south, and press the eastern switch. Jump to the southern walkway, and take the lift up. Hit the switch in the next room, and backtrack to the curved stairways.

Head south through the doorway, go around the bend, and enter the northeast doorway. Flip the switch, jump into the sludge pit, and go upstairs. Open the door, and run down the hall until you find an outdoors area. Dash to the switch in the west, and flip it. Return to the center of the level to find that a step and bridge have risen to a door, leading to a lift. Do not enter the door; instead, jump down to the inner walkway, and open the southwest door. Go to the opposite end, and flip the switch. Return to the walkway, and drop to the stone walkway below. Run along the east end, and flip the two yellow switches. Go to the west end, and press the red switch. Trigger the lift at the south, and step into it.

* The vertex count without the effect of node building is 5302.