MAP12: Once Nice is the twelfth map of 2048 Unleashed. It was designed by Greg Lafitte and Paul Corfiatis, and uses an untitled music track made by Corfiatis. 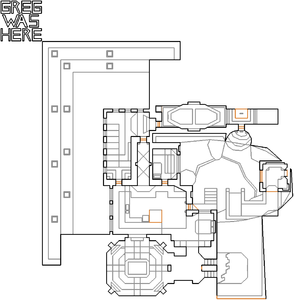 Map of Once Nice
Letters in italics refer to marked spots on the map. Sector, thing, and linedef numbers in boldface are secrets which count toward the end-of-level tally.

Take the super shotgun then leave the room by the south door to confront a few imps and revenants. Head south-east through a doorway next to a yellow key door and kill four shotgun guys waiting behind it then turn right to find the yellow skull key at the bottom of some steps, guarded by a mancubus and an arch-vile (the mancubus will see you first, so you can lure it into shooting the arch-vile for you). Go back to the yellow key door you passed earlier and step through it to collect a rocket launcher, use this weapon to kill two revenants (and one or two arachnotrons that teleport in) then go down the steps to a blood pool and turn right to see a silver door.

Open the door and kill three imps waiting behind it, then flip the switch to lower a lift that will take you up to a gray walkway. Follow the walkway past some health and armor bonuses to find the red skull key at the top of a bloodfall. Kill one or two more arachnotrons that teleport in then go back through the yellow door and enter the passage in the north-west corner - a Hell knight will be waiting here if you have not already alerted it. Go through the door at the end of the passage (requiring the red key) and turn left to see a staircase with an arch-vile waiting at the top. Climb the stairs and go through the door ahead then follow the walkway behind it round to the blue skull key - stepping on the crate holding the key will cause several imps, demons and a baron of Hell to teleport into various areas of the level. Go back to the blood pool past the yellow key door then head north up some rock steps to the exit door, open it and step on the sky floor in front of you to finish the level.

A berserk pack can be found behind a bookcase next to the stairs leading up to the blue key.