MAP12: Redemption is the twelfth map of Community Chest 2. It was designed by Gene Bird, and was originally released standalone as part of his Blind Alley series. 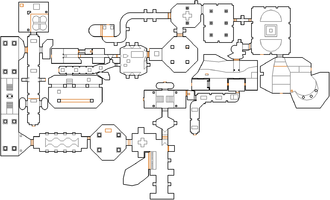 Flip the switch to lower the starting room. Open the door and take the path on your right first. Hit the switch at the very end, then go back and take the other route which is now open. At the end here, grab the red skull key and return to the starting point, pressing the switch to lower the lift and riding it back up. In the next room open the left door and follow the winding path to a switch which lowers the barrier on the right side of the previous room. Keep going and in the room with the fountain, the switch here opens the southern door. This next room holds the yellow skull key. Go to the southern side of the room and cross up the platform to reach the key, and then flip both switches in this room to leave (the southern switch is an unmarked yellow key switch which opens the western door in the room with the fountain). In the outdoor area, hit the switch in the blood pool, and run to the lift before it rises, then go straight through the doors going west to another switch (again, it is also an unmarked yellow key switch). This opens a passageway in the first building (the one with the pentagram face on the outside). At the end of this passageway, press this switch to open a door at the bend of the passage, and take the small lift. In the next room, shoot the switch across from you and press another one in the newly-opened room and go south. Keep going west and then north picking up the blue skull key as you go. The switch at the dead end reveals some more enemies and opens some previously inaccessible alcoves. The alcove on the right hand side has a switch that reveals the exit.

* The vertex count without the effect of node building is 1817.