MAP12: Speed is the twelfth map of The Plutonia Experiment. It was designed by Milo Casali and uses the music track "Facing The Spider" from Doom. 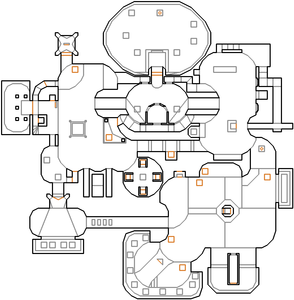 Map of Speed
Letters in italics refer to marked spots on the map. Sector, thing, and linedef numbers in boldface are secrets which count toward the end-of-level tally.

Leaving the starting point will cause six imps to raise out of the ground. After passing through the first door go east, fall into the pit and climb the stairs in the north to the yellow skull key. Continue upstairs to a narrow alley from which you can jump to the teleporter pad placed in the huge throne-like structure. Turn north and west through the tunnel, behind the windowed structure that faces the initial door, to the other pit and fall to the platform with the teleporter. This one leads to the yellow key door, behind which is a switch that opens a door south-west of the pit. Return via the same teleporter to that area, then first jump to the red skull key on the big square pedestal from the next higher ledge. Take the elevator up to the south-western part and follow the stairs in the west up and down, to grab the blue skull key from the window sill.

Upon heading back you will be immediately teleported to the south-eastern part of this area with four alcove structures. Each structure contains one button to lower wooden bars in the southernmost area. Jump back in the pit and take the lift again, this time turn south and east to the last large pit. To finish the level you have to press several buttons that raise bridges to get to various sides of the pit and, after all are activated, to reach the exit.