MAP12: Storage is the twelfth map of Daedalus: Alien Defense. It was designed by Rick Clark (Wildman) and uses the music track " ". 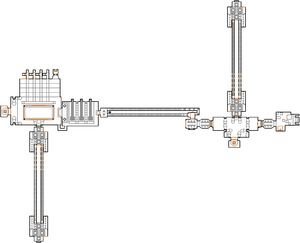 Go through the exit from the travel tube and bear left (east) to a set of double doors. Beyond them is a small cargo bay with an alarm going off in it. The red crates are highly explosive - shoot them at a distance with the pistol to destroy them, revealing a microgen power source and some ammo. Take the microgen and return to Secondary Bridge.

Go through the exit from the travel tube and bear right (west) to a set of double doors. Go through them and activate the panel on the right wall to reveal an apparent dead end, which lights up and reveals a conveyor belt apparently designed for cargo. Ride the conveyor belt, and take the lift down to a cargo bay where crates are being deposited and placed on conveyors. At the far end of the bay there is a large door, which is broken. Go through the maintenance access hatch next to it, into another bay which contains four conveyors on the north side, a vertical travel tube to the west and a translator charging booth to the north-east. Follow the second conveyor from left to a door. Open it and take the microgen inside. Activate the travel tube, which leads to Brig.

Go through the exit from the travel tube. Directly opposite it is a now-active vertical travel tube, which leads to Cryonics. Activate it and enter it.

There is another horizontal travel tube, on the south side of the westernmost bay, which becomes functional after restoring power on Brig, and leads to Scout Bay, allowing the player to explore the bulk of the map, although this is not required to make progress.

* The vertex count without the effect of node building is 3527.