MAP12: Subterra is the twelfth map of PlayStation Final Doom, and the twelfth map of the Master Levels episode. It is based on the PC version of MAP01: Subterra from the Master Levels for Doom II, with modifications to accommodate the PlayStation's framerate and memory limitations and add enhancements such as colored lighting. It uses the music track "The Broken Ones".

The author of the original level was Christen Klie. Changes for the PlayStation port were authored by Tim Heydelaar.[1] 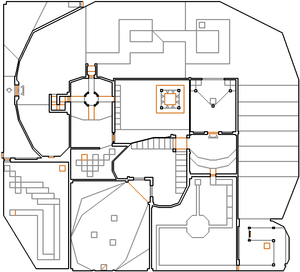 Map of Subterra
Letters in italics refer to marked spots on the map. Sector, thing, and linedef numbers in boldface are secrets which count toward the end-of-level tally.

Step forward to raise yourself out of the pit and collect a shotgun (if required). The doors out of this area will open automatically when you approach them, revealing two Hell knights. Climb down either staircase and step on the lift at the bottom, then get off at the middle floor (by going north). You will see four teleport pads in front of you which will take you back to the starting area when stepped on; the sides of the teleporter correspond to which corner you will appear in. Step on the south-east corner of the teleporter, then drop down a step and take the red skull key from the ledge.

Return to the lift and get off at the middle floor again. Head west to find another red door and go through it. Now look south to see a number of square wood platforms over a nukage pit - walk carefully over these platforms (as the nukage here is inescapable if you fall into it) until you reach a teleporter, which will take you to a room with three bridges. Open the west door and follow the narrow passage down several lifts. Once you reach the bottom, head south past the yellow door and press the switch on the south wall. Use the lifts to get back to the bridge room, then open the north door and press use on the wall behind it to lower the floor below you. Follow the walkway in front of you past two monster cages until you collect the yellow skull key.

Drop down to the floor and head west back to the yellow door, and go through it. Head south and open the blue door, then push the switch which is revealed next to you to light the path ahead. Go all the way down the lit staircase and press the switch at the end, then head back up to the blue door and go north into a nukage pit. Follow the pit north-east to the exit switch and press it to finish the level.

The starting area has four pits containing shotguns; players start in these pits and are raised upwards when player one moves. On PlayStation Doom, two of the pits are redundant as there can only be a maximum of two players.