MAP12: The Factory is the twelfth map of Doom 2 In Name Only. It was designed by Matt Powell (cannonball) and uses the music track "". The par time defined in MAPINFO is 3:30. 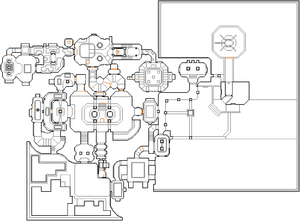 Two demons (Things 15 and 16) have no flags set for any of the three difficulty classes, so they do not actually appear in the level. They are at the same spots as harder monsters on skills 3-5, so probably were intended to appear on skills 1-2.