MAP12: The Factory is the twelfth map of Doom II. It was designed by Sandy Petersen and uses the music track "In The Dark". The par time is 2:30. 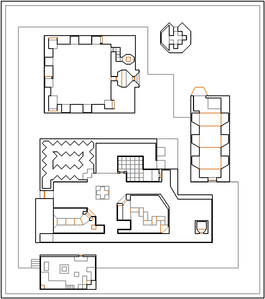 Enter the red brick building ahead of you via the lift. As you proceed through this building, platforms along the walls will raise, ambushing you with imps, so be cautious. Continue through the door at the end of this building where you will find an arachnotron. Once you are back outside, follow the tan brick building ahead of you around to the left. You will pass a smaller brick building to the south -- you can enter it for some items if you wish, but it is not necessary to complete the level. Continue circling the larger building until you reach a door in the west. Enter it and drop down inside. Hang a right, following the path between the two blue doors (be careful of the mancubus hiding in the alcove). At the next split in the path, turn right, snipe at the arachnotron on the ledge, taking cover if you need to, and pick up the blue keycard beneath it.

From the blue key, turn around and head in the opposite to this hallway's end. At the end of this corridor, you will see a small square structure just ahead. Enter the door on the side, kill the chaingunner, and pick up the yellow keycard he was guarding. Now return to the blue doors, killing the mancubi on the way. The eastern door contains little of value, so entering it is completely up to you. Ultimately, open the western blue door and run through the hall before the floor lowers to get the bulk cell at its end. Once the floor has sunk, drop down and go through the teleporter, which leads back outside.

Enter the brown building north of the one you were just in, and proceed through the second, yellow-locked door. The doorway leading back out of the yellow-door room requires the red key; however, there is no red key, so you will be unable to leave the next room. It contains nine automatically raising-and-lowering lift platforms, each containing a cacodemon that must be killed (some will see you but others do not know you have arrived yet). Five of these alcoves have switches that you must flip to open the level exit [in clockwise manner beginning from southeast: the first, fourth, fifth, seventh, and ninth]. After all five switches have been activated, a small passage in the northeast of this room will open, letting you access the exit teleporter.

In the building that leads to the exit, also filled with cacodemons, the door that you go through to enter the big area of the building is yellow coded from the outside and red coded from the inside, but there is no red key in this map. The red key was present when Doom II was first released and was later removed from the map because it has been decided that it was not necessary in order to complete the level. Thus the only way to leave the very last room before the exit is by simply exiting the level. As for the PlayStation or Sega Saturn console ports, said door is not red coded from the inside.

If you want to safely visit secret #2 without being killed or hurt greatly by imps, while you are playing the PlayStation or Sega Saturn console ports, go to the centre building first and come closer to the cross-shaped structure. Press on the middle off the east side of the structure as if you would press the switch inside it as usual. This will raise the platform up with the imps. Kill them right from here. Now to visit the secret itself, first get off this building via the blue door and going to the southern building as mentioned in the secrets section below. This can be a longer path as you need to revisit the central building at least two times, however, you will save a large amount of health. As for the PC version, instead you need to press a switch near the teleporter behind the blue door.

There is a certain area on the outer rim of the building (where an arachnotron is located) where an invisible wall blocks any projectiles that hit it (rockets included) and will cause the player to be seriously injured or killed if shooting at the arachnotron. This can be avoided by shooting it at an angle.

The teleporter (Sector 149) at the south building is tagged with the switch (Linedef 747) that opens the door in the room with the mancubus and super shotgun. Using the switch raises the sector's ceiling, though this causes no other ill-effects on the map.

The backside of linedef 648 is missing a lower texture. This is not noticeable in vanilla Doom because the player can only look around horizontally, however it is easily visible in source ports with free look support.

It is possible to activate several of the switches in the final encounter from the outside. This is useful in cooperative runs, where one player can go get the yellow key in order to get into the final area while another can start opening the doors blocking the exit, greatly reducing the time spent in the final encounter. It can also be used in nightmare runs to make the final encounter a tad easier since one has to visit fewer alcoves to press switches, but this would most likely take longer.

The yellow key can be bumped from the backside of the room it is housed in.

The official French name of this level is L'Usine.