MAP12: The Meat Grinder is the twelfth map of Speed of Doom. It was designed by Darkwave0000 and uses the music from Heretic E1M1. 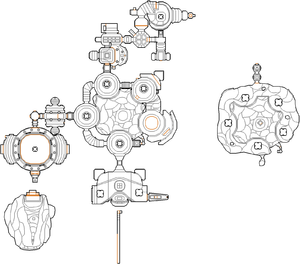 Map of The Meat Grinder
Letters in italics refer to marked spots on the map. Sector, thing, and linedef numbers in boldface are secrets which count toward the end-of-level tally.

Down in the room with the grinder, if you perform a linedef skip over any of the three line triggers and then hit the one-use switch to open the wall in front of the lift, crossing the last lines will close the wall and softlock you.

* The vertex count without the effect of node building is 4391.

There is a BFG9000 on this map which cannot be picked up without cheating. Near the end, at the red key switch, as you traverse the small crevice and step over a linedef, you will be teleported to a different area that looks just like the previous room. As soon as you cross over, there is a BFG9000 behind you - but moving back in that direction will teleport you back to the previous area.