MAP12: The Temple of the Oracle (Strife)

MAP12: The Temple of the Oracle is a level in Strife. It uses the music track "Mood".

When the piece has been obtained, the Oracle reveals that Macil holds the third one. At the point, the player must decide if he still trusts Macil and thinks that the Oracle needs to be destroyed, or believe its words and kill Macil. The decision is crucial for the outcome of the game. Whatever choice the player makes, the Oracle needs to be fought eventually to get one of the Sigil pieces. If the player kills the Oracle before Macil, the temple can be left for good. For tactical information on the Oracle's spectre, check this section.

In the Oracle's room, there is a door to the west that only opens when the player trusts the Oracle. The door has a teleporter that leads straight to the proving grounds. Thus, the commons and the acolyte factory are skipped entirely in the chosen branch. 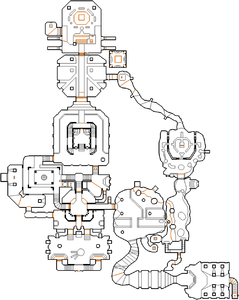 Map of The Temple of the Oracle
Letters in italics refer to marked spots on the map. Sector, thing, and linedef numbers in boldface are secrets.

There are two entrances to the level. One of them is hidden in the borderlands and does not need the oracle key.

To find the Oracle, you can take one of two separate paths. One of them has enemies, while the other does not. The hidden entrance leads to the latter path. If you take the primary entrance, you will find yourself walking in a large room. Keep going until you get to a spacious waterfall area. If you like to take the route without enemies, drop to the eastern side of the moat. Once you go there, you cannot return up soon. If you prefer the route with enemies, go through the door across the bridge and to the west.

Proceed until you come to a hub. Enter the southern door and take one of the two lifts. Upstairs, go through one of the doors in the south and flip the switch beyond. Get back to the room where you took a lift up and you will notice that doors have opened. Go through the door in the west and take another lift up. Flip the switch in the new area. Drop through a window and flip another switch.

Now, enter the door at the end of the stairs in the north and continue to the hall beyond. There are three staircases. When you take the middle one, you will find a room with yet another switch. Press it. Take the stairs to the left or right and you should eventually hear a chanting sound. Kill any remaining enemies before opening the big silver-white door.

The green room is the Oracle's inner sanctum. You can take a break as the enemies here will not attack if you let them be. The chanting sound is produced by the kneeling characters. They can be ignored, as they are just holograms. Walk past the stationary templars and open the northern door to find the Oracle.

The alternative way is a bit shorter and easier since there are no enemies on the way. If you took the hidden entrance in the borderlands or continued to the east from the waterfall area, you will find yourself in a cave. Find and flip a switch that opens a new area.

Jump on the greenish pillar and continue to the left or right. If you fall, you will have to find a switch that lowers a lift to take you back up. You should notice a door to the east. When you get to a switch that faces a dark opening, flip it. It will raise a small pillar that helps you to proceed.

Go through the dark cave hallway, and you will find a rising switch. Pull it to lower a lift. Go aboard and activate another switch on the top to access the green room. It is noticeable that the two templars that stand there become crushed by ceiling pillars when you enter the lift. In the green room, take the northern door to find the Oracle.

As you approach the Oracle, some acolytes will rise from the ground to your left and right. Do not worry about them as they will not attack you. If you look up, you will see the Oracle's spectre in the ceiling hole. Talk to the Oracle and ask your question. Once done, a teleporter will appear nearby that leads back to the borderlands.

In the Veteran Edition, an alcove is added in the room before the Oracle's chamber, containing the blue talisman sealed behind bars. These bars are raised when you approach the Oracle - after speaking to it, go back through the silver door to collect the talisman.

The kneeling holograms in the inner sanctum are harmless. If the player attacks them anyway, each will vanish upon taking 51 points of damage, leaving a projector behind.