MAP12: The Waterway is the twelfth level of Memento Mori II. It was designed by Orin Flaharty and uses the music track "System Shock" by David "Tolwyn" Shaw.

Your mission is to enter the area and clear out all remaining enemy resistance. Take out as many demons as you can and move on to the next area.

Troop #93 Report: Thin walkways over underground rivers make up the majority of this area. The huge underground caverns that make up this area are filled with some of the weaker Hellspawn, but we did see signs that larger demons had been here. 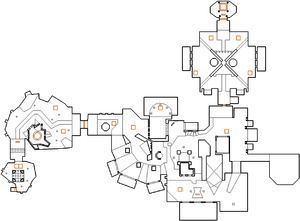 Map of The Waterway
Letters in italics refer to marked spots on the map. Sector, thing, and linedef numbers in boldface are secrets which count toward the end-of-level tally.

While this map has a relatively low enemy count, do not be fooled; this map plays out like later maps of the infamous The Plutonia Experiment, throwing the player against large amounts of monsters at once.

Pick up the armor. Turn around and approach the door. A cacodemon will be alerted - you might wish to deal with it first before opening the door.

As you open the door, you are faced with a horde of enemies:

Once this horde has been taken out, head up the narrow staircase ledge to the east. Try to snipe out the revenant (imp on Hey, not too rough and below) in the tower in the distance. As you continue forward, be wary of an imp (and a chaingunner on Ultra-Violence) to the left.

You will now be on a grey ledge with a switch next to bars. Flip the switch and immediately turn around to face south. A trap will open behind you, revealing eight imps - use your chaingun to make life easier for yourself. Pick up the lowered soul sphere nearby, kill the shotgun guys on the raised platform ahead and continue forward.

Before progressing this next part of the map, you may want to clear out the horde of enemies waiting in the area to the west, with imps in cages, zombiemen, shotgun guys, spectres and on Hurt me plenty and above, a baron of Hell. This will make your life much easier when progressing the level. Once they have been cleared out, head back out onto the grey ledge in the main area.

Your next task is to head around the green structure in the south and clear the arch-vile from its cage. By not rushing to progress the level, the arch-vile is now the one is the disadvantageous position. Keep peeking around the corner and use a super shotgun (if available), to take it out. Be wary of a nearby chaingunner and up to six imps behind windows in the south.

Once the arch-vile is dead, jump from the protrusion in the south onto the platform with the gargoyle switch. Flip the switch, and a portion of the metal ledge to the east (with the yellow key) will lower. Pick up the yellow key, then head west into the teleporter in the water to be teleported back up to the main grey ledge.

Back on the main grey ledge, head west into the area with the imp cages. If you cleared out the enemies earlier, there should be no resistance as you continue to the blood-stained yellow door, aside from a Hell knight (Hurt me plenty and below) or baron of Hell (Ultra-Violence and above) on a platform near the bend. Open the yellow door and go through.

This next room has a narrow path above water. As you enter, you will be set upon by two zombiemen on the path, a cacodemon, and three shotgun guys in alcoves. Your objective is to get to the platform in the northwest with the blue key, but it is guarded by an imp and a chaingunner (Hey, not too rough and below), a mancubus and a chaingunner (Hurt me plenty), or two mancubi (Ultra-Violence and above). Once the enemies are thinned out, jump from the walkway to the ledge with the blue key, then immediately look south to kill a chaingunner positioned to open fire on you. Grab the blue key, drop into the water and take the teleporter to be taken back to the entrance of this room.

Go back down the narrow path again, but this time, go all the way to the end. Flip the gargoyle switch at the end to lower it and nearby bars blocking the way. As you run across the next gap, keep right to be teleported onto a megaarmor. Drop down to the east and enter the white teleporter in the north to be teleported to the narrow staircase ledge near the start of the level.

Go back up the narrow staircase ledge. The bars near the first switch you flipped are now open. Enter this room, and deal with the horde of imps in the upper cages and up to two barons of Hell on the lower floor. Once enough enemies are dead, step into the teleporter.

This will teleport you to an area behind the starting section of the level. Turn around and open the blue door in front of you. Use the gargoyle switch ahead to lower it into the ground, then step into the hole in the floor to exit the level.

On Ultra-Violence, one of the mancubi (thing 187) in the blue skull key room is hanging partially off two edges of the platform below him, resulting in him becoming immobile, and unable to act until he is killed.

This level is one of the few in Memento Mori II which can be completed in under a minute. The first barrier, with the soul sphere on it, can be passed by if you run (or straferun) toward the canyon on the other side from its diagonal edge. This is impractical to perform on Nightmare difficulty, though. In addition, you can slip by the enemy force on your way to the yellow skull key door by treading along the outer edge of the walkway. To avoid needless backtracking, it is recommended to reach the exit by using the eastern teleporter in the combat armor room as you enter it, warping you in front of the now-opened bars and allowing quick access to the teleporter leading to the exit.

In NM100S runs, the quickest way to obtain both secrets is to acquire #2, and then #1. To reach #1 from #2, simply drop off the north side of the platform you teleport on.